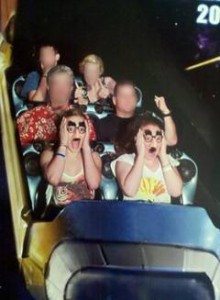 Contestants’ submitted photos wearing GNCU’s Embarrassing Car Contest Glasses, which were provided by their local GNCU branch. The winners were selected based upon the photos with the highest number of Facebook votes. O’Day’s entry, titled “Gas Prices Are Even Scary in Space”, features her wearing the contest glasses while on a roller coaster ride.

“The contest was part of our vehicle loan campaign,” said Ron Willard, Vice President of Marketing for GNCU. “We wanted a fun and engaging way to promote the benefits of borrowing through our credit union, and we received some very creative submissions in the process.”