By ThisIsReno July 28, 2011
Baghdad's traffic, choked by hundreds of checkpoints, slows to a crawl while security forces inspect vehicles for weapons and explosives. Lynsey Addario/National Geographic 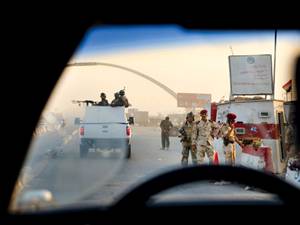 Baghdad's traffic, choked by hundreds of checkpoints, slows to a crawl while security forces inspect vehicles for weapons and explosives. Lynsey Addario/National Geographic

INCLINE VILLAGE — Iraq War veteran and award-winning poet Brian Turner recently returned to Baghdad for the first time since 2004, this time as a tourist. “I wanted to learn about the place where I’d been, but without a weapon in my hand,” he tells Morning Edition host Steve Inskeep.

Turner reflects on his travel experience in the July issue of National Geographic, remarking how the city has changed: “The sounds of war have been replaced by the sounds of children playing soccer on the grass.”

KNPB is currently airing an interview with Turner viewable here. Audio is also airing throughout the month on our local NPR station (KUNR 88.7FM).

Brian Turner served seven years in the Army, most recently in 2004 as an infantry team leader in Iraq. He is the author of two books of poetry, “Here, Bullet” and “Phantom Noise,” which has been recently short-listed for the T.S. Eliot Prize. He teaches at Sierra Nevada College, where he runs a low-residency writing program.