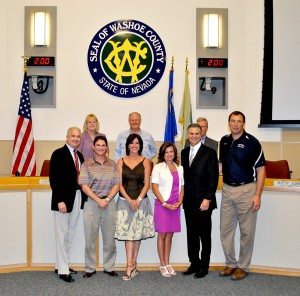 The late Jack Reviglio, one of the founding partners of Western Nevada Supply and a founding board member of the Boys & Girls Club of Truckee Meadows, was honored today by the Washoe County Commission with a proclamation declaring March 12 “Jack Reviglio Day.”

The commission noted Reviglio ’s long commitment to the northern Nevada community both as an entrepreneur who always ran his business ethically and as a philanthropist who gave to causes too numerous to count. Friends and family were on hand at the commission meeting to accept the proclamation.

Since 1976 when Reviglio and friends started the Boys & Girls Club with a vision of serving kids in need, it has grown and evolved into an institution. Just last week the club opened its 20th site in Lemmon Valley and expects to serve more than 10,000 members in 2011. Over the years thousands of kids’ lives – both through the Club, as well as K-12 schools, churches and universities – have been touched positively thanks to efforts of the Reviglio family.