Review of settlements shows no pattern of nondisclosure by state agencies

By Sean Whaley, Nevada News Bureau: A review of cash settlements paid by state agencies to employees and contractors shows no pattern of failure to bring large payments to the Board of Examiners for review and approval, Gov. Brian Sandoval said today.

The board, which also includes Attorney General Catherine Cortez Masto and Secretary of State Ross Miller, reviewed 12 pages of cash payments, most of which were unrelated to settlements with employees.

A number of the settlements included in the report were for small amounts with prison inmates.

Sandoval said there is one clear example of a settlement made by the Department of Transportation that should have come to the board for approval.

The payment to former NDOT employee Chris Sanseverino to settle three different matters in 2010 totaled $150,000, double the $75,000 amount required to be brought to the board for approval. Sanseverino also received another $25,000 settlement in 2008.

Concerns about this and other cash settlements were first reported last month by the Nevada News Bureau.

Rudy Malfabon, deputy director for NDOT in Southern Nevada, said there was an issue of confidentiality in the Sanseverino matter. 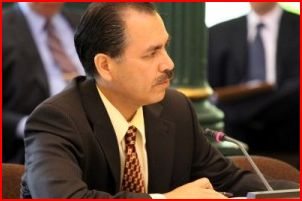 NDOT official Rudy Malfabon testified on the issue of cash settlements at the Board of Examiners today/Photo: Sean Whaley, Nevada News Bureau

“Obviously the direction would be given to NDOT to bring those up to this board for approval in the future, he said.

The only other potential settlement at issue was a $79,989 payment made by the Department of Employment, Training and Rehabilitation’s Services to the Blind to Ronald Bussen in 2007. Sandoval said he is seeking more information on the matter.

The other issue raised in the report is the large settlements paid by the Department of Transportation to resolve claims by contractors. One payment to the Washington Group in 2007 totaled $7 million. Another payment to Frehner Construction in 2008 totaled $5.1 million.

Malfabon said such settlements are typically resolved by staff.

“In cases of construction claims they typically are negotiated by NDOT and settled and not brought to the Transportation Board,” he said.

In response, Sandoval asked: “So these are all settlements that are occurring without any review by any board, just within the Department of Transportation?”

Malfabon said yes to the question, but noted that larger settlements would be brought to the Transportation Board as part of the director’s report at board meetings.

Sandoval and other top state elected officials serve on the board, and Sandoval said he will take up the issue at the next board meeting as to whether some of the larger settlements should at least be brought forward for review.

Since there was only one clear example of an agency failing to bring a settlement to the Board of Examiners for review, no further action was deemed necessary by the board to clarify the provisions of the state administrative manual. Sandoval was assured that a reminder will be sent to all state agencies clarifying when such settlements must be brought to the board for approval.

Gov. Brian Sandoval is told large settlements with contractors do not come to the Transportation Board for approval:

Malfabon says large settlements will be brought to the Board of Examiners for approval from now on: