by Sean Whaley, Nevada News Bureau: Attorneys for the state Democrat and Republican parties argued their cases Tuesday before the Nevada Supreme Court over whether they should pick their candidates for the special election to fill the vacant 2nd Congressional District seat, or whether it should be a “ballot royale.”

The Democrat Party and Secretary of State Ross Miller, himself a Democrat, are asking the court to rule by July 6 that any and all comers should be able to file to fill the vacancy left with the appointment of former Rep. Dean Heller, R-Nev., to the U.S. Senate.

Attorneys for the Republicans say Miller exceeded his authority in making the election a free-for-all, and that the parties should select the single candidate to represent them in a special election that has been set for Sept. 13, although it is possible this date might have to be changed.

Some Supreme Court justices appeared to question if Miller’s administrative decision to allow any candidate to run as a Republican or Democrat was appropriate, given the requirements in Nevada state law and the failure of the secretary of state’s office to finalize regulations on such a special election following the Legislature’s adoption of a new law addressing the issue in 2003.

“What is of concern to me is a broader legal question, (which) is the extent to which deference should be given by this court or any court to an administrative decision which is not represented by regulation,” said Justice James Hardesty.

But Justice Mark Gibbons asked attorney David O’Mara, representing the state Republican Party, why the court should not defer to Miller.

“Why shouldn’t we just let the secretary of state make this decision and interpretation, because otherwise we’re going to have judges running these elections and setting the policy” which is probably not the best option, he said. “Maybe it’s better for the chief elected official of the state to make these decisions.”

Miller, who sat in on the 45-minute oral argument in front of the seven justices, one of whom participated from Las Vegas, said too much should not be read into the questioning. Only a final ruling from the court will clarify the court’s position, he said. 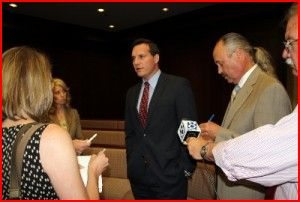 “The district court got it wrong because it’s decision is directly contrary to the plain language of (Nevada Revised Statutes 304.240),” he said. “That language says a major party candidate is nominated by filing. It doesn’t say: is nominated by the central committee, by the party or by anybody else for that matter. It says you’re nominated by filing a declaration or acceptance of candidacy.”

O’Mara argued against giving deference to Miller to make such an interpretation.

The 2nd Congressional District seat has been held by Republicans since it was created in 1981. The GOP is concerned that if multiple candidates are allowed to run under its party name, the vote will split and favor Democrats.

Russell ruled in favor of the Republican Party in May, and the Democrats and Miller appealed.

But filing for the race, which remains open through Thursday, has attracted multiple candidates running under both party banners. Fifteen Republicans have filed, although several others, including state Sen. Greg Brower, R-Reno, have withdrawn.

Retired Navy commander Kirk Lippold remains in the race, however.

Ten Democrats have also filed for the vacancy, including former university system Regent Nancy Price, but she announced her withdrawal from the race last week.

Besides the front-runners, most of the major party candidates have little name recognition.

Whoever wins the seat will have to immediately begin a re-election campaign for the 2012 general election.

While the ballot question remains in limbo, the two major parties are not wasting any time attacking the opposing front-running candidate.

On Tuesday Democrats accused Amodei of dodging the question of his support for major changes to the Medicare program as proposed by Rep. Paul Ryan, R-Wis.

“Spin and doubletalk will not change the fact that Kirk Lippold and Mark Amodei are on record giving their full throated support for the Heller-Heck plan to end Medicare,” said Nevada State Democratic Party spokesman Zach Hudson.

Rep. Joe Heck, R-Nev., is the incumbent in Congressional District 3.

Gov. Brian Sandoval appointed Heller to the Senate after the resignation of John Ensign over his conduct involving an affair with a former staff member.

Justice James Hardesty asks why the court should defer to Secretary of State Ross Miller on the ballot question:

Justice Mark Gibbons asks why the court should not defer to Miller on the CD2 race:

Republican attorney David O’Mara says the court should not defer to Miller on the ballot issue:

Democrat attorney Marc Elias says Miller is the proper authority on the question: