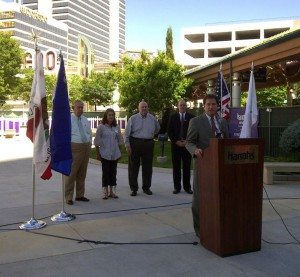 Cashell, Sparks Mayor Geno Martini, local Olympians, and business leaders to commemorate the birth of the modern Olympic Games on June 23, 1894.  A similar commemoration was held at the Capitol building in Sacramento.

Lt. Gov. Krolicki is chair of the Reno Tahoe Winter Games Coalition (RTWGC), a group dedicated to bringing the next North American Winter Games to the Lake Tahoe region.  The RTWGC is working closely with the California Winter Games Committee (CWGC) to promote the Olympic movement.

“The Reno/Tahoe region enjoys a rich Olympic heritage, and today we join more than 160 countries in celebrating the triumph of the modern Olympic Games’ creation 117 years ago,” said Krolicki.  “This is a tremendous opportunity for Nevada and California to work together celebrate the Olympic spirit.”

The RTWGC will hold an Olympic Day Family Festival this Saturday, June 25, at Mackay Stadium on the University of Nevada campus.  Sacramento held its Olympic Day participation event this past Monday at Raley Field, home of the Sacramento River Cats.  The event was chaired by 1964 Alpine Olympian Starr Walton Hurley, Honorary Chair of the CAWG.

“We are inviting families to come out and try over a dozen sports from the summer and winter Olympic Games,” said Krolicki.  “They will meet Olympians, hear their stories of hard work, dedication and perseverance and we hope they come away applying those Olympic values to whatever their passions may be.”