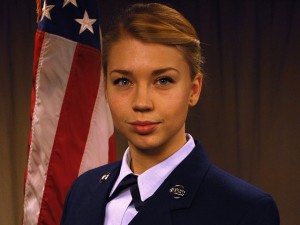 CARSON CITY— Airman 1st Class Tori Fleck, a U.S. Air Force broadcast specialist with American Forces Network, Europe received the prestigious Thomas Jefferson Award denoting her the Dept. of Defense’s outstanding new broadcaster for 2010. (Fleck is not a member of the Nevada National Guard, but we are disseminating this release at the request of the family.)

Fleck’s winning submissions received praise from the judges. One judge stated, “Fleck is a very versatile broadcaster whose enthusiasm for her job jumps out of the TV and radio. Any newsroom could benefit from her talents.”

Fleck, 21, grew up in the Reno area. She was on the volleyball and swim teams at McQueen high school and graduated from Truckee Meadows Community College high school in June 2007.

Fleck enlisted in the Air Force in Feb. 2009. After basic training she attended the Defense Information School at Fort Meade, Md. and is currently stationed at Supreme Headquarters Allied Powers Europe, Casteau, Belgium.