by Sean Whaley, Nevada News Bureau: For the three leading Republican candidates seeking the Congressional District 2 seat vacated with the appointment of Dean Heller to the U.S. Senate, it was all about qualifications and experience in a debate held here Wednesday.

State Republican Party Chairman Mark Amodei, a former state senator, state Sen. Greg Brower, appointed to fill the seat formerly held by retired Sen. Bill Raggio, and retired Navy commander Kirk Lippold, faced off ahead of a GOP meeting Saturday in Sparks that could determine which candidate will get the party nod. 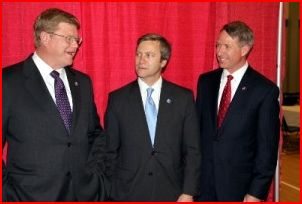 Republicans vying for the Congressional District 2 seat, from left, Mark Amodei, Greg Brower and Kirk Lippold, chat before the debate. / Photo: Sean Whaley, Nevada News BureauThe debate was fairly sedate until the end, when the candidates talked about their qualifications for the post.

Brower criticized Amodei for pushing a massive tax hike in the 2003 Nevada legislative session, and for supporting collective bargaining efforts during his time in the Legislature.

Brower said Amodei is on the “wrong side” of these issues in 2011 for Republicans, who want lower taxes, less spending and a smaller government.

Amodei defended his tax proposal, and said he was participating in the 2003 session unlike Brower, a member of the Assembly when he lost a GOP primary race to Sharron Angle in 2002.

Lippold acknowledged his lack of political experience, but said he would benefit from not being burdened by any “business as usual” positions on the issues facing the country. Lippold, commanding officer of the U.S.S. Cole when it was attacked by terrorists in Yemen in 2000, said he has the strength of character and integrity to stand up to President Obama and Senate Majority Leader Harry Reid.

The debate held at the Boys and Girls Club of Truckee Meadows drew about 115 people. The candidates agreed on a number of issues, from rejecting the idea of increasing the federal debt, at least without corresponding cuts in spending, to working to reduce the country’s dependence on foreign oil.

Lippold said nuclear power has to be a part of that strategy, and suggested nuclear reactors could be built at the former Nevada Test Site to help power the Southwest.

Right now the CD2 race is wide open, with 31 candidates, including 17 Republicans, already filed to succeed Heller. Filing ends June 30. But the Nevada Supreme Court is expected to decide later this summer if the Democrat and Republican parties can pick their candidates rather than see a “ballot royale” at a special election that will occur sometime this fall.

Republicans are challenging the wide open contest advocated by Democrat Secretary of State Ross Miller. The GOP is concerned that with several strong Republican candidates on the ballot, Democrats could take the seat for the first time since it was created in redistricting in 1981. The district covers all of Northern and rural Nevada and includes a small portion of Clark County as well.

With similar views on the major issues, the candidates acknowledged that their background and experiences are key to who should win the GOP nod for the seat.

It was at this point that Brower delved into Amodei’s record in the Nevada Legislature. Amodei was termed out in the 2010 election.

“My record in Carson City is one of fighting for balancing budgets without raising taxes,” Brower said. “In 2003, Mark was part of the effort, he co-sponsored a bill, to raise what would have been the biggest tax increase in state history.”

Brower also questioned Amodei’s support for public sector collective bargaining during his time in the Legislature.

In response, Amodei said the tax bill he proposed was designed to head off an income tax that could have been imposed on Nevadans.

“That bill was done as a way to defeat the Nevada IRS,” he said. “So think about that. This state with an income tax? No way.”

In response to the collective bargaining statement, Amodei said: “And the collective bargaining stuff was a way to try to blow up the teachers union, who we are still under the thumb of financially. And I said that in my floor statement, but my opponents are not telling you that, because you know what, it doesn’t serve their political purpose.”Brower also pointed out Lippold’s lack of legislative or Washington, D.C. experience.

Lippold said the nation’s founding fathers didn’t have such experience either.

“They took life experiences and went on to build the greatest nation on the face of the earth, and give us the tools that still hold true today,” he said. “I will do, having experienced a terrorist attack personally, whatever it takes to keep this nation safe.”

In an interview after the debate, Lippold said: “We need people that are going to go to Washington that have the strength and character and integrity to stand on principle and tell the Obama Administration and the Harry Reid machine, now is not the time to continue government expansion. We need to reduce spending, we need to reduce government, we need to reduce taxes.”The state Democrat Party also weighed in on the debate with a press release immediately following the event.

“Tonight’s debate highlighted the clear choice voters in CD 2 face this fall between a Democrat who will fight to create jobs and protect Social Security and Medicare, and a Republican who supports the job-destroying, Medicare-ending Washington GOP agenda,” said Nevada State Democratic Party spokesperson Zach Hudson.

Brower says Amodei is on the wrong side of issues important to Republicans:

Amodei says his 2003 tax proposal was an effort to head off a state income tax:

Amodei says his collective bargaining position is not being fully explained by his opponents:

Lippold says he has the strength of character to stand up to President Obama and Sen. Harry Reid: