by Sean Whaley, Nevada News Bureau: On deadline day for Gov. Brian Sandoval to act on the remaining bills from the 2011 legislative session, measures extending existing taxes for two more years, authorizing the creation of a toll road around Boulder City and banning the use of hand-held cell phones while driving were all approved. 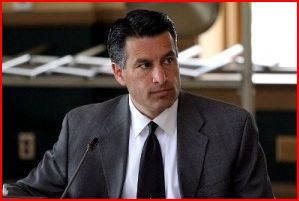 Also approved was a controversial bill allowing adults-only bars that have smoking to serve food. The measure was opposed by anti-smoking opponents, but welcomed by tavern owners who testified their businesses were suffering from the vote-approved Nevada Clean Indoor Air Act.

“Every session we hear legislators bemoan the fact we’re at the top of all the bad lists and the bottom of the good lists,” commented Michael Hackett, consultant for the Nevada Tobacco Prevention Coalition, when the bill was approved by the Legislature. “Obviously, that’s still acceptable for most legislators.”

Sandoval also signed the last of three major campaign reform bills sought by Secretary of State Ross Miller, which will make major changes to reporting of contributions to candidates and banning some questionable campaign practices.

“It’s a substantial victory for voters today and the final piece of our campaign and election reform package has been enacted now,” Miller said. “So I think voters can anticipate significant improvement in the next election, one that will be visible to them in terms of transparency and disclosure.”

Among other reforms, the bills require electronic filing of campaign contribution and expense reports so the public can easily search the information. They will also improve disclosures by third party groups that run campaign ads.

“That’s probably the biggest complaint that we get in our office every election cycle is that the public doesn’t know who is funding the TV ads or the mailers that they get in the mailbox, Miller said. “This will significantly improve those disclosure requirements.”

Sandoval signed dozens of bills, but vetoed several others, including Assembly Bill 578, which Republican critics said would lead to the creation of a full-time Legislature, and Assembly Bill 301, which addressed the restoration of voting rights for ex-felons.

The veto of AB301 was criticized by the ACLU of Nevada.

“We are surprised and disheartened that the governor vetoed a bill which would have created easily understandable, reliable laws,” said Dane Claussen, executive director for the ACLU of Nevada. “Gov. Sandoval rejected an opportunity to clarify our voting laws not just for the voting public, but also our county officials and clerks.”

He also vetoed a controversial bill that was amended in the last minutes of the legislative session to include a transmission line for NV Energy.

“To increase utility rates on Nevadans struggling to emerge from a severe economic recession would result in the imposition of an unnecessary and unfair burden on our recovery,” Sandoval said in his veto message.

In one unusual decision, Sandoval allowed a bill relating to pet cemeteries to become law without his signature.

“Although I have not been involved in the drafting or the subsequent passage of this bill, when my office conducted our internal review, it became clear that a member of my family may be affected by SB191 becoming law,” he said in a statement.

Earlier this week, Sandoval also signed the major bills establishing the state budget for the two years beginning July 1, as well as four major education reform measures that were part of a package agreed to in exchange for extending a 0.35 percent sales tax increase and a higher payroll tax rate for the state’s largest businesses.

The $620 million tax extension bill, which will include the higher revenues through June 30, 2013, wasn’t all bad news for anti-tax advocates, however. It also eliminates the payroll tax for 70 percent of Nevada’s businesses, those with payrolls of less than $250,000 a year. The taxes were approved by the 2009 Legislature for two years to balance the current budget. That had been set to expire June 30 until the tax and reform package was agreed to by Sandoval and most lawmakers.