By Sean Whaley, Nevada News Bureau: A bill allowing victims of sex trafficking to clear their criminal records of prostitution-related crimes in order to get a fresh start in life was signed into law today by Gov. Brian Sandoval.

Assembly Bill 6 is the most recent effort by Assemblyman John Hambrick, R-Las Vegas, to combat the illegal sex trade in Nevada that frequently involves underage children.

“I am humbled by the support shown for the victims of sex trafficking,” Hambrick said. “It is a serious problem for our community and our country, and I’m proud that we have taken a step to help the victims who were not only forced into the sex trade but had to bear the burden of being convicted of prostitution.” 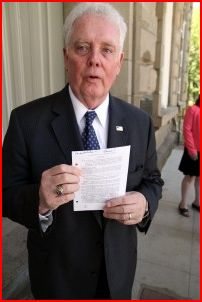 The bill, which will take effect Oct. 1, received unanimous approval in both the Assembly and Senate.

“It was hard work,” Hambrick said. “We had a lot of people within the community, particularly in the south, a large spectrum from the faith communities, the Jewish Federation, the Religious Alliance in Nevada, the two Catholic bishops, the Episcopal bishop, they all worked hard. I’m just very pleased it got through the way it did.”

Efforts will continue to combat this problem, he said.

“We have to continue this journey,” Hambrick said. “We started this last session going after the traffickers, this one is relief for the victims. The journey is not over with yet. Next session there will be additional bills coming forward.”

According to Nevada law, it is a crime for anyone to engage in prostitution outside of a licensed Nevada brothel; however, AB6 will give Nevada courts the ability to vacate a judgment if the person was a victim of sex trafficking or involuntary servitude.

“The victims of sex trafficking are often recruited as children, and this legislation can give them a fresh start without the conviction for prostitution, something completely beyond their control,” Hambrick said.

The bill is a continuation of Hambrick’s successful efforts in the 2009 legislative session to combat human trafficking. He won unanimous support for a bill in 2009 providing for civil penalties of up to $500,000 against those convicted of human trafficking of minor children. Funds collected under the law can be used to provide care to those minors exploited for sexual purposes.

Las Vegas was identified in 2009 by the FBI as one of 14 cities around the country with high rates of child prostitution.

Assemblyman John Hambrick said the bill was passed with the help of many people, including those in the faith community:

Hambrick says his efforts to stop human trafficking will continue: