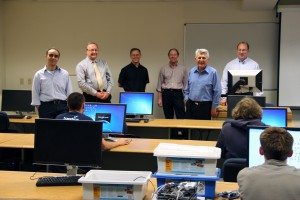 To meet the demands of the marketplace, the University of Nevada, Reno has combined disciplines and added a new major to its roster: computer science and engineering.

“This will make our students more marketable, more well-rounded and more likely to be incorporated and become productive in their new work environments,” Yaakov Varol, chair of the University of Nevada, Reno’s CSE department, said.

Integrating the disciplines of computer science and computer engineering, the major attracts students interested in learning about computer software and hardware and how to solve problems with computer technology.

Varol said the departments and the University made the decision last year to merge the two degrees in computer science and in computer engineering in order to accommodate growing demand from local industry and industry professionals for an integrated degree.

“We decided we would be better serving our students and the people that hire them if we combined the two degrees into one,” he said of the major that is concluding its first year for graduates and undergraduates. “It’s a popular choice for students.”

Varol said companies such as General Electric in Minden, Bally’s in Reno and Sierra Nevada Corporation in Sparks, always interested in hiring University of Nevada, Reno graduates, had asked for more “well-rounded” students at the master’s level that would be comfortable with both computer science and computer engineering. In making its decision, University officials consulted current students, alumni and the Industry Advisory Board, receiving strong support for the new major.

“The combination of the two degrees into one makes a lot of sense, not just for us, but also for the industry that we serve, and for our students,” Varol said. “There’s a trend nationally to go for that combination of scientist and engineer in one package.”

The CRA Taulbee Survey, polling U.S. and Canadian graduate schools, found a 10 percent jump in enrollment in computer science and engineering programs from 2009 to 2010 – the third consecutive year for increases in enrollment in the major. According to the National Association of Colleges and Employers, which conducted a Job Outlook 2011 survey, 53 percent of responding organizations found computer science and engineering among the top-10 most attractive majors.

The new graduate program in the College of Engineering offers students the opportunity to choose between a course-only and a thesis track. The course-only option includes four more courses, but does not require the research necessary in the thesis track.

Through both tracks, students investigate the theory, implementation and design of information processing systems, as well as the design of computing and communication hardware systems. For students who choose the thesis option, they can conduct research in intelligent systems, games and simulations, software systems, computer and network systems and other more specific fields.