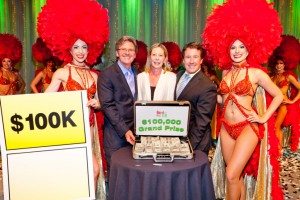 Time stood still for a moment on Saturday night, as Linda Warrington of Sparks, NV, realized she had just won $100,000.  Warrington was the grand prize winner in the Quest for Cash $750,000 giveaway at John Ascuaga’s Nugget.

“I’m still in shock,” she said as she received her winnings.  “The first thing that I’m going to do is ask my boss for a week off!”  Warrington had to use all of her recent  vacation time to travel for some medical treatments.  “The one thing I’ve really wanted to do is go to Las Vegas to see Garth Brooks with my best friend,” she added.

The Nugget’s Quest for Cash swipe and win promotion began in October 2010. Casino patrons and hotel guests that have a John’s Club card could swipe their card daily for a chance to win prizes including, the illustrious, golden ticket.   From the 300 golden tickets that were given away throughout the promotion, ten finalists were chosen on Saturday night.  Those 10 finalists were invited onstage to stand next to the “Nuggette” showgirl of their choice.  Each Nugget was holding a card with a secret amount of money.  Nine cards were revealed to show $500 and one, Linda Warrington’s card, was revealed to show $100,000.

Warrington said she chose that particular show girl because she had been nice to her and her family.  The Nuggett had posed for photos with Warrington’s father earlier in the evening.

John Ascuaga’s Nugget is one of the few family-owned casino resorts left in the country. Founded as a coffee shop with a few slot machines on March 17, 1955, John Ascuaga has built the Nugget into a world-class, full-service gaming resort destination