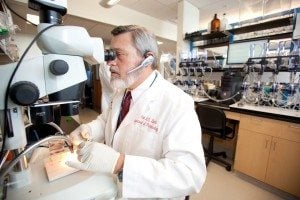 The University of Nevada School of Medicine announced today that it is a Grand Challenges Explorations winner, an initiative funded by the Bill & Melinda Gates Foundation. Iain Buxton, Pharm.D., professor of pharmacology, will pursue an innovative global health and development research project, titled “Effective Treatment to Prevent Preterm Delivery.”

“GCE winners are expanding the pipeline of ideas for serious global health and development challenges where creative thinking is most urgently needed. These grants are meant to spur on new discoveries that could ultimately save millions of lives,” said Chris Wilson, director of Global Health Discovery at the Bill & Melinda Gates Foundation.

To receive funding, Buxton and other Grand Challenges Explorations Round 6 winners demonstrated in a two-page online application a bold idea in one of five critical global heath and development topic areas: polio eradication, HIV, sanitation and family health technologies, and mobile health. Applications for the current open round, Grand Challenges Explorations Round 7, will be accepted through May 19, 2011.

Preterm labor and delivery of an under-developed fetus affects approximately 13 million births worldwide each year. The number of babies that die annually due solely to their prematurity ranges from 20,000 (4 percent) in the U.S. to 336,000 of the 1.2 million newborn deaths (28 percent) in Sub-Saharan Africa.

“Those babies that survive their prematurity have numerous chronic health disabilities that constitute a major human tragedy, are enormously costly to societies and cripple third world development,” said Buxton. “Advanced medical care makes it possible for premature fetuses, some as early as 22-24 weeks, to survive, but at huge cost often resulting in life-long disability for survivors. Prematurity, whether due to infection or occurring spontaneously, threatens global health.”

Despite decades of research, the majority of preterm labor cases leading to preterm delivery prior to 37 completed weeks of gestation, are unexplained. Scientists still do not know what signals are responsible for labor at term, let alone preterm labor. In the U.S., there is no Food and Drug Administration approved medicine to prevent uterine contractions at the time of labor, and there is no satisfactory animal model in which to propose studies of preterm labor mechanisms since there is no animal that naturally experiences this uniquely human problem.

Buxton and his laboratory are known worldwide for their studies of the human uterus that have resulted in new ways of understanding uterine contraction-relaxation mechanisms. With this first-in-Nevada funding from the Bill and Melinda Gates Foundation, Buxton and his colleagues will be exploring their recent discovery of mechanisms that are activated by stretch of the uterus during gestation and have led to new ideas for developing agents to prevent preterm birth.

About Grand Challenges Explorations
Grand Challenges Explorations is a $100 million initiative funded by the Bill & Melinda Gates Foundation. Launched in 2008, Grand Challenge Explorations grants have already been awarded to nearly 500 researchers from over 40 countries. The grant program is open to anyone from any discipline and from any organization. The initiative uses an agile, accelerated grant-making process with short two-page online applications and no preliminary data required. Initial grants of $100,000 are awarded two times a year. Successful projects have the opportunity to receive a follow-on grant of up to $1 million.