By Sean Whaley, Nevada News Bureau: Legislative Democrats went ahead today with their own funding plan for public education, establishing a level of spending that puts the budget at significant odds with GOP Gov. Brian Sandoval and his opposition to new taxes.

The votes by Democrats have upped the ante in the budget dispute with Republicans, creating a hole estimated at $700 million by state Budget Director Andrew Clinger.

A party-line vote not to use school district bond reserve funds to cover school operating costs as proposed by Sandoval created a $247 million hole in the budget with no revenue to cover it. Another vote against a 5 percent cut in teacher pay added another nearly $260 million to the hole.

Lawmakers of both parties voted in unison on some significant cuts to public education, however, including a proposal to require teachers and other school district public employees to pay a share of their retirement contribution. The proposal, which would have to be worked out in negotiations with teacher and other employee unions at the school district level, would save $100 million a year.

The budget votes came at a joint meeting of the Senate Finance and Assembly Ways and Means committees. The votes followed testimony from representatives of the Las Vegas Chamber of Commerce and the Nevada Resort Association asking for a discussion on the potential for additional tax revenues for the state budget in concert with meaningful policy reforms.

Reforms sought by the chamber include changes to the state’s collective bargaining process and efforts to address the long-term unfunded liability of the public employees’ retirement system, issues which have not seen any significant action in the 2011 legislative session.

The votes also came after Sandoval administration officials presented a plan for $247 million in additional spending for public education as a result of higher tax revenue projections set by the Economic Forum on Monday.

The “add backs” presented by Chief of Staff Heidi Gansert and Clinger would restore all funding for all-day kindergarten and the class-size reduction program for the lower elementary grades. It would also add $223 million to the basic pupil support, but it would not eliminate proposed cuts to teacher salaries. 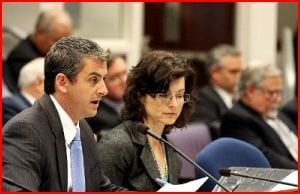 By proposing new spending on the public schools budget above that available based on the Economic Forum projections, Democrats now will have to either take money from other programs and services or find new revenue. A number of tax proposals under consideration by Democrats are expected to come up at a hearing Thursday, including a tax on some services and an extension of some of the tax increases approved in 2009 but set to sunset on June 30.

Sandoval has rejected any suggestion of increasing taxes or fees to balance what is now a $6.1 billion general fund budget after the Economic Forum identified $218 million in increased tax revenues.

Sandoval is set to speak to state residents at 6 p.m. today to present his views on the ongoing budget debate with Democrats, who do not have the votes to increase taxes without support from some Republican lawmakers.

Longtime lobbyist and Sandoval adviser Pete Ernaut, who attended the public education discussion, said it and the televised remarks from the governor mark “the first day” of the “real” legislative session.

In his public testimony, Billy Vassiliadis, representing the Nevada Resort Association, asked for policy makers and business and community leaders to engage in a discussion on ways to increase funding to the state budget while at the same time ensuring improved student performance. 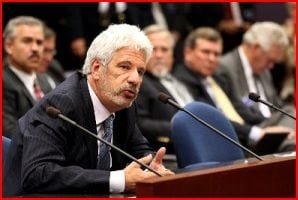 “And so one of the decisions you have to make, all of you and the governor has to make, is where do we go going forward,” Vassiliadis said. “While we appreciate very much the discussion of restoration of cuts, but we’re restoring to what? We’re restoring to being 45th in the best case, 49th in the worst case, in education funding?

“But my clients really want to know, what are we going to do, what are you as state leaders going to do, and the governor going to do, to actually put us on a track where our education system can not only benefit from the recovery but actually make the recovery go faster, and all Nevada students and future Nevada businesses will want to move here and take advantage of a great state,” he said.

Sandoval’s unwavering position is that any tax increase could slow job creation and Nevada’s economic recovery.

Sandoval’s position saw some support today from the conservative Keystone Corporation, which issued a press release criticizing the Las Vegas chamber for advocating for an extension of the payroll tax increase approved by the 2009 Legislature to balance the current budget.

The organization put out a political update today saying: “The Las Vegas Chamber is leading the fight to extend the 100 percent increase of payroll tax (Modified Business Tax) they championed last session set to sunset this year. Make no mistake this is a tax on Nevada job creators that will prevent businesses from creating new jobs and stimulating our economy.”

The joint budget hearing went through a series of votes, some getting unanimous support from the two panels because they were part of the restorations proposed by Sandoval.

But others generated party-line disputes, including a motion by Senate Majority Leader Steven Horsford, D-Las Vegas, not to use $247 million in school district debt reserves to fund public education operating costs.

Democrats said using the bond reserve money would go against the wishes of voters who supported school construction questions at the ballot.

But Assemblyman Pat Hickey, R-Reno, said he could not support the motion without some indication of where the money would come from to pay for the policy change.

There was also some criticism of the committee process from Sen. Barbara Cegavske, R-Las Vegas, who said members received only about 24 hours notice of the meeting. She also questioned why the governor’s add backs were not on the table for discussion.

“If you want to work this as a process where we’re all working together, then let’s do it together, let’s not do it in segmented forms, and one entity pushing the whole cart,” she said.