By Sean Whaley, Nevada News Bureau: It started out with two individuals sending “care packages” to the troops deployed in Afghanistan but quickly turned into a concerted effort by employees of the Nevada State Health Division to make life a bit brighter for those serving in Operation Enduring Freedom.

Packages were sent with everything from beef jerky to “slightly used” decks of cards and dice from local casinos to the troops based in Kandahar, Afghanistan. One employee contributed hand knitted helmet liners.

In all, over 30 boxes were packed and shipped to two units during the winter and summer of 2010: the Army’s 10th Mountain Division and the Navy’s Naval Mobile Construction Battalion where two children of Health Division employees were serving.

“The collection boxes were filled over and over with interesting items unique to Nevada,” said an email describing the project. “The response from generous Health Division employees was overwhelming.”

Those serving with the two units are now safely home. 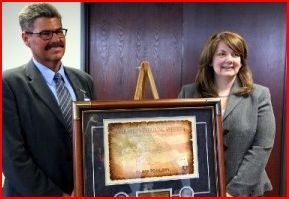 “The Nevada State Health Division provided exceptional support and encouragement to the soldiers of Bravo Company throughout their deployment to Afghanistan,” said a letter from the Army to the agency staff.

The gift was unveiled at the agency’s capital offices, one day before Armed Forces Day, with about 75 employees in attendance. The military was represented by Capt. Edward Furlong, the Sierra Nevada Recruitment Company commander for the U.S. Army.

It was received by Health and Human Services Director Mike Willden, Health Division Administrator Richard Whitley and Ann Wilkinson, deputy chief of staff for Gov. Brian Sandoval, who said the governor will be observing Armed Forces Day in Hawthorne.

Willden said the letter of thanks came from the 2nd Battalion, 22nd Infantry Regiment known as the “Triple Deuces.”

“Their motto today is ‘Deeds, Not Words,’ ” Willden said. “And I thought that was kind of the connection to the Health Division. We are proud of our military and we’re proud of the support and the things we do for them, but it’s really about deeds, not words.”

Furlong said the Health Division employees clearly made an impact with the packages, because typically a letter of appreciation is sent out for such efforts. 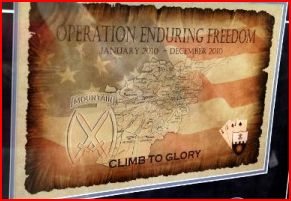