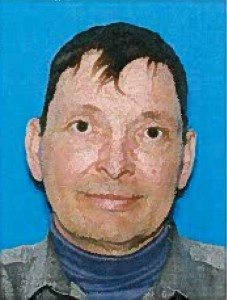 The Washoe County Detectives Division is seeking information on the whereabouts of Edward Oliver, 54 year old Sparks resident. Edward was last seen on Sunday, April 24, 2011 at approximately 8:15AM at the Vitality Veteran’s Housing Program, located at 3660 El Rancho Drive in Sparks, Nevada.

Edward checked out early morning on April 24th to walk to a nearby convenience store and he did not return by his 10PM curfew. On Monday, April 25th, Edward failed to report to a meeting, leaving his personal belongings at the Vitality Veteran’s Housing Program. Edward was reported missing to the Washoe County Sheriff’s Office on April 26th.

Edward does not have family living in the area but it’s known that he frequents the Reno downtown corridor. Edward walks with a slight limp due to an injury on his right foot. Edward wears glasses and was last seen wearing a black hooded jacket, blue jeans, and loafer-style shoes with special orthotic inserts.

If anyone has information on Edward’s location, please notify the Detectives Division at 328-3320.