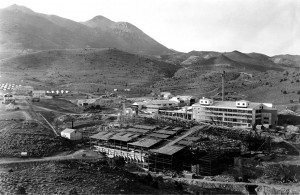 CARSON CITY — The Bureau of Land Management (BLM), Carson City District-Sierra Front Field Office is seeking public input through provisions in Section 106 of the National Historic Preservation Act on a proposal to reduce site safety hazards at the United Comstock Merger Mill at American Flat (AFM) in Storey County, Nevada.  The BLM requests public input on the identification of historic properties and comments on potential effects analyzed in the environmental assessment to the AFM complex relative to regulation 36 CFR Part 800.2(d) and 800.3(e).

Comments will be accepted through June 17, 2011, and should be addressed to Colleen Sievers, Project Manager, BLM-Carson City District Office, 5665 Morgan Mill Road, Carson City, NV  89701, or e-mailed to [email protected].  After the Section 106 process is completed, the BLM will issue a Decision Record for the project, which would initiate a 30-day public appeal period.

BLM prepared an Environmental Assessment (EA), entitled Environmental Assessment – United Comstock Merger Mill at American Flat(DOI-BLM-NV-C020-2010-0017-EA), to analyze a variety of alternatives to mitigate safety and historical resources concerns on the mill site.  The EA and related documents are available on the webpage at: http://www.blm.gov/nv/st/en/fo/carson_city_field/blm_information/nepa/comstock_merger_mill.html

The AFM site is located on public lands within the Virginia City Landmark District near Gold Hill, Nevada.  The mill was built in 1922 to process local gold and silver ore utilizing cyanide vat leaching in what was then described as the largest concrete mill in the United States.  This historic property is significant because of its association with the Comstock Mining District.  Since abandonment in 1924, this seven-acre mill site has been used as a place to hold parties, post graffiti, and conduct paintball wars despite physical safety hazards from falling concrete, underground mill sumps filled with water, and holes in the concrete flooring.

A 2008 audit of the site by the Department of Interior, Office of the Inspector General (OIG), found the AFM to be a high risk liability to the U.S. Government.  The BLM’s proposed management actions at AFM will promote public health and safety on public land and comply with the direction of the Office of the Inspector General that BLM “identify and resolve trespassing on abandoned mine sites and assess and mitigate hazards associated with these sites” (DOI 2008). The need of the action is to mitigate or abate the physical human safety hazards present on the AFM site, while addressing historic resources.