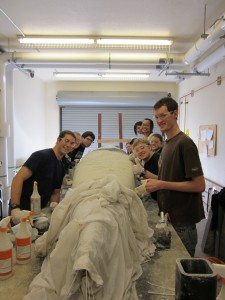 Members of the University of Nevada, Reno’s concrete canoe team cast the canoe they’ve been designing and building since September, “Black Diamond,” for the American Society of Civil Engineer’s Mid-Pacific regional conference on April 15-16, 2011.

“It’s definitely going to be a tough competition,” Angeli Gamez, project manager for the team, said. “But we’ll use it as inspiration to do well and go to nationals.”

The Mid-Pacific conference competition will take place next Friday, April 15 through Saturday, April 16 at California State University, Sacramento. Last April, the University of Nevada team advanced from the regional competition to win second place at the national conference in June, besting 22 other North American teams.

The competition engages engineering students by testing their technical skills in designing, building and paddling concrete canoes. Students work through 76 pages of ASCE rules and regulations, which change slightly every year. Nevada’s 25 team members have been working on this year’s canoe since last September.

“We actually have an estimate for how long we’ve been working on the entire project – it took 5,100 hours,” Gamez said.

Teams are judged in four categories, each weighing 25 percent of the final score: the final product, including the canoe, a cutaway model and a table display of the materials used ; paddling, including two different sprints and an endurance test for paddlers; a five-minute oral presentation plus a question-and-answer session with judges; and a technical design paper.

Nevada’s team practices its paddling at the Sparks Marina every Saturday and Sunday, through rain or snow, and meets several times a week to work on the canoe. This year’s canoe, “Black Diamond,” is 20 feet long, half an inch think and 31.25 inches at its widest part. ASCE rules stipulate teams have to use two recycled aggregates in the concrete mix. This year, Nevada’s team made its own aggregate out of glow-in-the-dark air soft pellets.

Gamez said the competitive atmosphere has also intensified this year, as Nevada’s traditional rival, University of California,Berkeley, has more to prove: last year, the Berkeley team’s canoe broke in half at the regional competition. Teams from San Jose, Stanford, Fresno, Chico, Davis and San Francisco will also pose a challenge, Gamez said.

“The team has worked incredibly hard this year and I’m so proud of what we’ve accomplished so far,” Justin Kunert, president of the University of Nevada’s ASCE chapter, said. “We can’t wait to compete in Sacramento.”

For more information about the Mid-Pacific conference, go to http://www.ascemidpac.org/home.