U.S. Rep. Joe Heck gives praise to Gov. Sandoval for budget that does not increase taxes

By Sean Whaley, Nevada News Bureau: U.S. Rep. Joe Heck praised GOP Gov. Brian Sandoval in remarks to the Nevada Legislature today for proposing a budget that does not raise taxes, saying it is the way to an economic recovery.

Heck, R-Nev., also expressed appreciation for Republican lawmakers who so far this session have supported Sandoval’s no new taxes or fees position during the lengthy review of his two-year, $5.8 billion general fund budget. 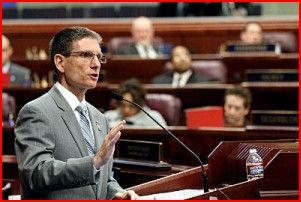 Heck said job creation is the way for Nevada to grow its way out of its fiscal problems, and he pointed to the state of Virginia as one that dealt with a large budget deficit by cutting spending, not raising taxes.

“In fact, a number of states have begun to recover more quickly,” he said. “It is because they listened to small businesses, they listened to the people who create jobs and they reduced government spending without increasing taxes. They did this to inspire confidence and establish predictability.”

“Yes, there were painful reductions to programs people cherished, but I would trade the criticism resulting from cutting or eliminating a handful of programs if it meant 100,000 more jobs in Nevada right now,” he said. “People want a paycheck, not a government check.”

In comments to the press after his remarks, Heck said unemployment is “the root of all evil” in Nevada.

“We need the jobs,” he said. “And burdening businesses, burdening individuals with higher taxes, is not going to create jobs.

“I think you’ve got to exhaust every possible opportunity to rein in those programs that have lost sight of their original mission, or aren’t accomplishing what they were intended to accomplish and that means cutting,” he said. “Every program means something to somebody.”

Heck acknowledged it is difficult to grow the economy and attract high end businesses without a good educational system.

“You’ve got to concentrate on what generates a result,” he said. “That is why career and technical education needs to be funded and funded well.”

Education spending needs to focus on the skills needed to diversify the economy, Heck said.

Heck also said in his remarks to Sandoval and lawmakers that the federal government has to get its spending under control or tax increases will be inevitable.

“We must work together to return government spending to responsible levels,” he said. “That means making difficult decisions to bring government in line with the private sector, it means demanding accountability and performance, and it means forcing government to do more with less. That’s what our families have done.  It is what our businesses have done and it is what our government must do.”

Heck also praised Sandoval and Lt. Gov. Brian Krolicki for focusing on economic development and job creation in the legislative session, issues that have the support of Democrats as well.

“Many have talked about Nevada’s potential to be a leader in renewable energy, and I agree,” he said.

That is why Heck said he supported the continuation of the federal loan guarantees for renewable energy projects.

“But we must also look past the energy production side of the equation,” he said. “We must have serious discussions about bringing the research and development as well as the manufacturing components of this industry to Nevada. That is where the sustainable, good-paying jobs will materialize. I will continue to support research and development tax credits, work to streamline the bureaucracy to access Nevada’s lands that remain under federal control, and expedite the federal permitting process while protecting the environment and maintaining safety.”

Rep. Joe Heck says states that are beginning to recover balanced their budgets without raising taxes: