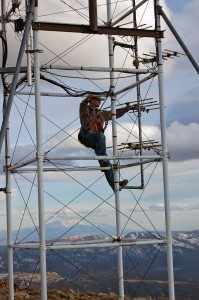 With more than 20 earthquakes in several hours Saturday evening, and 400 in the past week, Nevada Seismological Laboratory members have mobilized from the University to the Hawthorne area to step-up monitoring efforts for the region. The highest in the sequence occurred at 5:45 p.m. on Sat., April 16. It was a magnitude 4.6, followed 10 minutes later by a 4.1.

“Although the earthquake rate has waxed and waned through time, the number of recorded events is very high,” Graham Kent, director of the seismological lab at the University of Nevada, Reno said.  In total, this sequence has thus far produced nine magnitude 4 or larger earthquakes near Hawthorne, and about 25 earthquakes larger than magnitude 3.0.

The quakes are located in the mountains about nine miles southwest of the town of Hawthorne. This town, with a population of 3,200, is about 100 miles southeast of Reno and 70 miles south of Fallon along Highway 95. Residents have felt much of the shaking but damage has been minor.

To better monitor the evolving swarm, members from the Nevada Seismological Laboratory, working with the Nevada Division of Emergency Management, have deployed additional seismometers around this sequence to upgrade earthquake locations and, in particular, the depth of earthquake initiation.

“A shallower depth would have the potential for greater damage to buildingsin the area,” Kent said. “The more information we have about this swarm, and more accurately know the magnitude and the depth, the better emergency services can prepare and respond. Given the occurrence of volcanic activity in the region during the past 10,000 years, seismologists will also be looking for signs of tremor in case there is a magmatic origin to this sequence. Evidence thus far points to a tectonic origin, but all scenarios must be investigated.”

Communication equipment for the seismic monitoring network was snowbound atop TV Hill outside of Hawthorne, so the road was cleared of snow to enable a rapid response to this event. A broadband seismometer was placed on the mountaintop Sunday and several additional seismic stations will be deployed surrounding this swarm over the next several days.

“Ongoing activity near Hawthorne is a reminder to all Nevada citizens to be earthquake prepared, since this level of activity – grerater – can occur anywhere in our state,” Kent said. “In the event of an earthquake, everyone should remember to drop, cover and hold on. It’s important to have a family plan, food and water supply for several days.”

To monitor ongoing activity in Hawthorne and across the state visit  http://www.seismo.unr.edu/Earthquake.