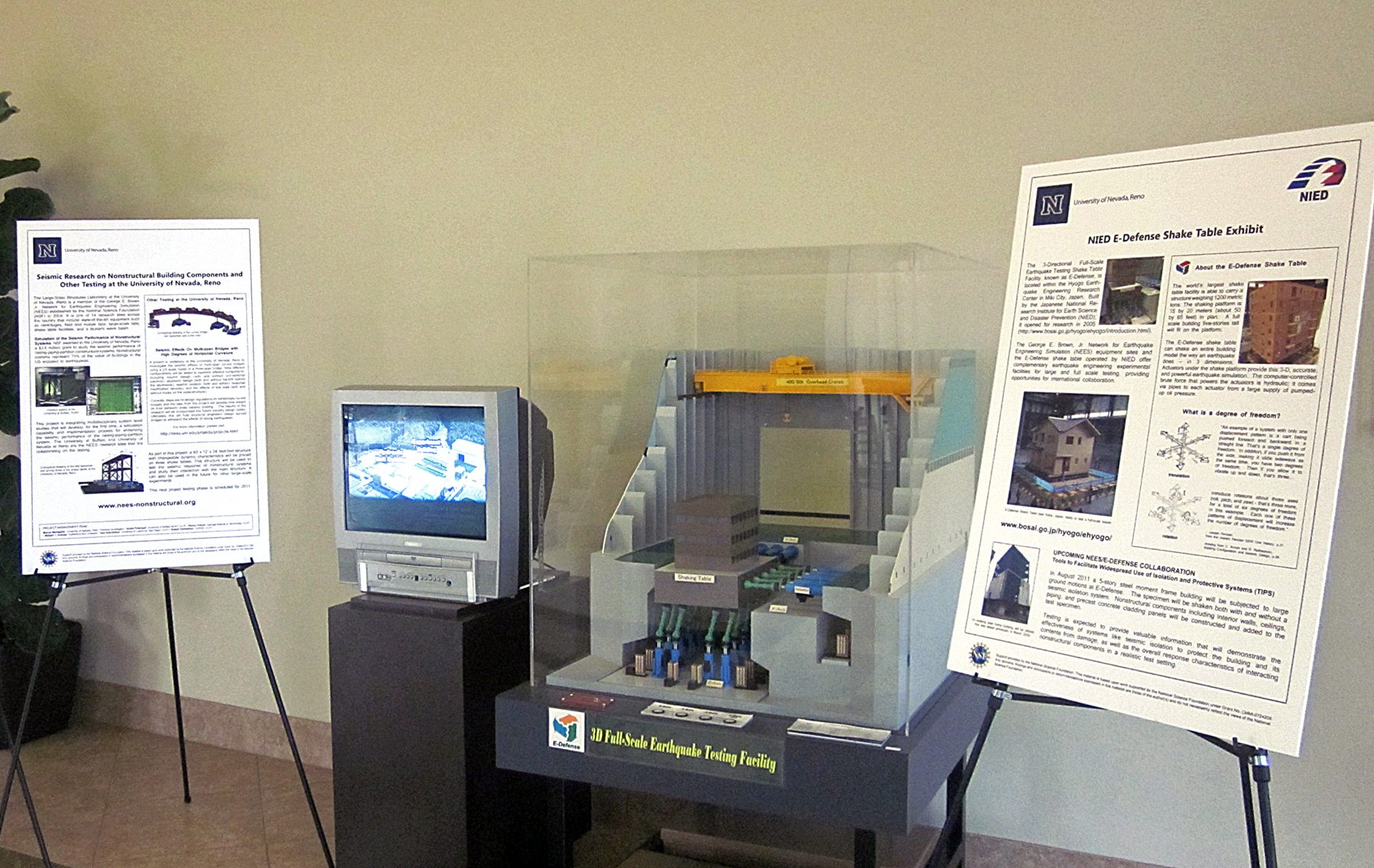 A model of the world's largest earthquake-simulation shake table, worth $400 million and accelerating advances in earthquake engineering, is on display at the Mathewson-IGT Knowledge Center through April.

The world’s largest earthquake-simulation shake table in Miki City, Japan played a large role in helping scientists design buildings that could withstand large earthquakes. The devastating earthquake in Japan three weeks ago was evidence of the country’s preparedness with most of the country’s skyscrapers and steel buildings surviving the deadly quake.

Now, thanks to the efforts of the Japanese National Research Institute for Earthquake Science and Disaster Prevention (NIED), the University of Nevada, Reno is proud to have on display, at the Mathewson-IGT Knowledge Center, a three-dimensional working model of the NIED’s Earth- or E-Defense shake table, which simulates the ground motions of an earthquake.

“It’s a great opportunity and honor,” said Ian Buckle, professor of civil and environmental engineering and director of the large-structures earthquake engineering lab at the University of Nevada, Reno. “We’re the first university worldwide to display this model. It’s also exciting because one of our earthquake engineering researchers will be conducting experiments on the real thing in Japan this year.”

Keri Ryan, professor of civil and environmental engineering at the University, will travel to Japan in August as lead investigator to conduct her own set of experiments on the E-Defense shake table.

While the model on display at the Knowledge Center is about 24 inches by 24 inches, its progenitor, the E-defense shake table, is the world’s largest, measuring 65 feet by 49 feet. It can support building experiments weighing up to 2.5 million pounds. Japanese engineers began conducting experiments on it in 2005, 10 years after the devastating Kobe earthquake prompted the Japanese government to commission scientists to research seismology and improve building standards to avoid a future catastrophe of Kobe’s degree.

The huge shake table cost the Japanese government $400 million. It can move up and down, side to side, backwards and forwards – simulating the motions of a real earthquake. The model on display at the Knowledge Center, which repeats those motions in a much smaller scale, is valued at $50,000 to $60,000. Visitors can control the small shake table’s movements with a set of buttons on the display and observe the model through a glass case.

For Buckle, the E-Defense shake table model represents something else entirely: the ability to show students the latest advancements in earthquake engineering.

“It’s virtually impossible to describe it to anybody,” Buckle said of the shake table. “There’s nothing like being able to show it and make it move. You can’t describe it in a classroom.”

As an assignment, Buckle sends his students to the display and tells them to come back and report on what they saw and to compare it to the College of Engineering’s three 50-ton, 14 by 14 foot biaxial shake tables and the newest in the lab’s arsenal, the triaxial 50-ton capacity shake table that moves in six different directions.

As the third-most seismically active state in the nation, Nevada can benefit from its experts and future engineers studying the shake table model and improving the way the state tests buildings for earthquake preparedness.

“For the public, this means safer places to go to school, safer houses,” Buckle said. “We live in earthquake country. We have to be ready for the next earthquake.”

The E-Defense shake table model, which was acquired with the help of Consortium of Universities for Research in Earthquake Engineering (CUREE), will be on display for another month on the first floor of the Knowledge Center before moving for the remainder of the summer to the Harry Reid Engineering Laboratory, where the University’s four large shake tables are housed.