Saddle-trained horses available for adoption on Saturday, May 21 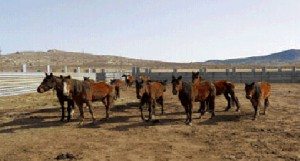 Nineteen wild horses from the ranges of Nevada from BLM-administered public lands will be offered for adoption at the NNCC corrals starting at 9:00 a.m. for public viewing, followed by a competitive bid adoption conducted by an auctioneer that begins at 10:00 a.m.

The horses range in age from four to nine years, are saddle-trained with at least 120 days of training, and vary in weight and color.  The beginning bid on all horses is $150.  The horses are trained at the NNCC by inmates in the Nevada Department of Corrections program.

A catalog of BLM wild horses offered for the May 21 adoption is posted on-line at http://www.blm.gov/nv/st/en/fo/carson_city_field.html. Frequently asked questions about the program are answered at the same site. Copies of the catalog are also available at BLM offices in Reno and Carson City.

Potential adopters are asked to enter the Northern Nevada Correctional Center off Snyder Avenue on the south side of Carson City.  From U.S. 395, take Snyder Avenue east for 1.5 miles to the entrance to the Northern Nevada Correctional Center.  Turn right (south) and watch for signs and event personnel at the extreme south end of the facility directing event participants to the horse corrals and parking.