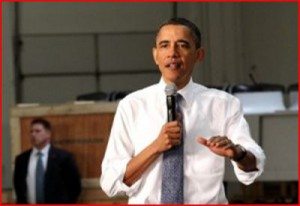 In front of a backdrop of “green machines” Obama touted plans to end $4 billion in subsidies for oil companies in favor of providing incentives for renewable energy companies.

“Instead of subsidizing yesterday’s energy sources, let’s invest in tomorrow’s,” Obama said. “I want companies like Electra Therm to set up shop in America, and hire American workers, and build American products.”

The investor-funded company is the type of firm Nevada business groups and government entities have been trying to incubate in Nevada. ElectraTherm has benefited from grants from the federal Department of Energy.

The company is in the district of Sen. Ben Kieckhefer, R-Reno.

“I appreciate him coming to this company in my district,” Kieckhefer said, adding that he appreciates that the president would highlight Nevada’s role as an emerging energy provider. “Renewable energy and economic development are not partisan issues.”

Gov. Brian Sandoval has said promoting renewable energy should be a focus for Nevada. The state’s close proximity to California, with its requirements for greater amounts of its energy coming from renewable energy sources, and its low tax base are two advantages Nevada already has.

“I think that the president selected a company like this to spotlight shows how much we are open to new businesses and new industry like this coming to our region,” he said, adding that state legislators from both parties are eager to move bills that could further foster growth in the renewable energy sector in Nevada.

Groups such the Nevada Institute for Renewable Energy Commercialization already work with investors and universities to help create renewable energy start-ups. The potential future employees for such companies, Truckee Meadows Community College students, were among the 425 guests at the invite-only speech.

In the energy debate, the president largely ignored the proposed Yucca Mountain nuclear repository. He acknowledged that the idea was contentious, but did not share his opinions about it. The president had, however, earlier withdrawn funds for Yucca Mountain in his budget.

During the hour-long speech the president also highlighted key Democratic talking points. He defended his signature health care reform law and addressed the recent federal budget imbroglio by advocating a “balanced” approach with some spending cuts and tax increases on the wealthiest 2 percent of Americans.

He also addressed the proposed cuts to Nevada’s economy.

“I understand that here in Nevada the economy has been slowest to recover because this was also where the housing boom was hottest,” Obama said.

Echoing state Democratic leaders, Obama said that Nevada will have to make “tough choices” but at the same time cannot eviscerate its education system along the way.

“Ultimately we’ve got to make sure that we’re not cutting education unnecessarily,” he said. “In some cases, revenue is going to be necessary.”

Obama’s visit to Reno is part of a larger U.S. tour to sell the president’s budget plan, which runs counter to the plan House Republicans have advanced.

Many Democratic state legislators attended the event, as did all of the state’s constitutional officers except for Sandoval, who greeted Obama as he exited Air Force One but did not stay for the speech because of a prior engagement.