By Sean Whaley, Nevada News Bureau A proposed constitutional amendment that would require a two-thirds vote in the Legislature to cut funding to or impose an unfunded mandate on local governments was heartily endorsed today by local officials including the mayors of Reno and Las Vegas.

Senate Joint Resolution 9 is being sought by Sen. John Lee, D-North Las Vegas, but would come far too late to stop a multi-million dollar hit to counties in Gov. Brian Sandoval’s proposed two-year budget even if it wins approval in the 2011 legislative session. 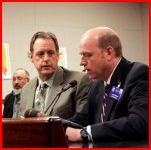 Sandoval has proposed shifting the cost of $107 million worth of programs to the counties to balance his $5.8 billion general fund budget. He also wants to redirect $121 million in local government property taxes to fund the state’s two universities.

Past Legislatures have raided local government funds to balance the state budget as well.

The constitutional amendment would have to pass twice, this session and in 2013, and then go to the voters for approval in 2014, before it could take effect. The Legislature is already required to get a two-thirds vote to raise taxes.

It was heard by the Senate Legislative Operations and Elections Committee, which took no immediate action on the proposal.

Las Vegas Mayor Oscar Goodman, testifying from Southern Nevada, said unfunded mandates from the state are no different than those from the federal government.

“To us this is no different than the experience that we’ve had with the federal government when they imposed unfunded mandates on us and we have to live with that imposition,” he said. “We’re all representing the same constituents, though in different capacities, and we’re ready to work, and we’re willing to work, and future legislatures, on these serious issues, should know that we are of the mind that we want to resolve this on behalf of the folks that we represent.”

The city has made great efforts to reduce spending and economize where possible, Goodman said.

Reno Mayor Bob Cashell was more blunt: “Do I like it when someone comes messing with my taxpayers’ money. No, not really. Neither would you either, so, we would like to sit down and work with you and make sure we can do things and make them go forward. We think this is a good step but there needs to be some dialogue in the middle.”

The mayors were joined by North Las Vegas Mayor Shari Buck as well as representatives of Washoe and Clark counties, the Nevada League of Cities and the Nevada Association of Counties, in supporting the measure.

Senate Majority Leader Steven Horsford, D-Las Vegas, who is pushing for increased tax revenues to replace some of Sandoval’s cuts to social services and education, challenged the notion of ownership of the limited funds available to support government. He made his remarks prior to most of the testimony from local government representatives.

“The references that somehow the state is taking local government money is a little troubling to me, because it is somehow viewed as local government money and not taxpayer money,” Horsford said. “And I would like to use this, maybe, as an opportunity to open a discussion about how we can work as partners, regardless of jurisdiction, to prioritize the needs of all of our constituents that we serve.”

Horsford said Sandoval has offered some suggestions on how the delivery of services could be realigned between the state and local governments.

“And we need to work from those suggestions, but we need to figure it out in a way that makes sense,” he said. “Because what we shouldn’t do is impact the service delivery to our constituents in such a way that it is compromised.”

Local government officials agreed with Horsford’s comments, but said such a discussion is too complex and requires more time than is available in a 120-day legislative session. Lawmakers hit the halfway point today.

Goodman says the city wants to work with lawmakers on the issue of service delivery:

Sen. Steven Horsford says delivery of services not an issue of state versus local governments:

Sen. Horsford says SJR9 is an opportunity to discuss delivery of services:

Statement: WashoeDEMS saddened by the death of Onie Cooper