By Sean Whaley, Nevada News Bureau: A major campaign finance reform bill that would require most candidates to file their contribution and expense reports electronically narrowly passed out of an Assembly panel today on an 8-7 vote.

The bill would also move filing deadlines up to give voters more time to review the political donation and expense information before casting their ballots.

Assembly Bill 452 was approved by the Assembly Committee on Legislative Operations and Elections and will now go to the full Assembly for a vote. It must then be considered by the Senate. 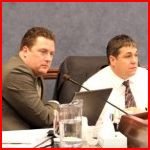 The close vote appeared to be related more to opposition to a separate section of the bill imposing a two-year cooling off period before former lawmakers could lobby the Legislature rather than the campaign reporting provisions. The vote was not along party-lines.

The provisions for electronic filing and earlier filing dates for the reports are being sought by Secretary of State Ross Miller, who has said Nevada’s current reporting laws result in the state getting a failing grade on campaign transparency.

Electronic filing of the reports will allow Miller’s office to create a searchable database of the information, making it much easier for the public to use.

Nevada has consistently received poor grades for its transparency on election reform efforts, including an “F” in 2008 from the Campaign Disclosure Project.

The reforms were originally in two other bills sought by Miller, Assembly Bills 81 and 82, which also contained numerous other changes to campaign and elections law. Because there was some concern about several sections of these two bills, the key reporting provisions were incorporated into the separate bill by Speaker John Oceguera, D-Las Vegas, as a way to move the reforms forward.

AB81 and 82 have now been heavily amended, with many sections that caused concerns among members of the public removed. The panel delayed action on AB81, but also passed AB82 in the work session. AB81 will come up for further review on Tuesday.

Proposed to be removed from AB81 was a provision to increase filing fees for candidates, and another prohibiting a person from running for office if the individual had an unpaid civil or criminal penalty. A provision providing for time off from work for an employee to participate in a presidential caucus is proposed to be removed as well.

A provision imposing disclosure requirements on third-party groups that spend money on behalf of or against a candidate remain in AB81.

AB82 also had several sections deleted by the panel, although a provision allowing a county to establish an electronic voter registration system remains intact.

AB452 proposes to move up the filing dates of the campaign contribution and expense reports so the information is available prior to early voting. Reports would be filed four days before early voting and would be updated to reflect any additional contributions and expenses four days prior to the primary and general elections.

It would also make the Secretary of State’s office the central repository for the campaign reports for all elections, as well as for financial disclosure statements required of candidates and elected officials. These reports would also be filed electronically.

Assemblyman William Horne, D-Las Vegas, an attorney and member of the committee, opposed the provision because of a concern it could affect his ability to represent a client in his professional capacity.

His concerns were supported by some other panel members, including Assemblyman James Ohrenschall, D-Las Vegas, who said it is another disincentive for people to run for public office.

“We hear so often about how it is so difficult to get people to want to run for office, how there are so many obstacles, whether it is being away from your family or giving up time from your career,” he said. “And I see section 22 as one more obstacle that we put up in front of people who might want to serve and I don’t think it is good policy.”

But Oceguera said the cooling off proposal in section 22 is one that is being adopted by several states, and that appearances are important to ensure public confidence in elected officials.

“It’s not a matter of whether people are doing anything wrong, I can’t point to anything specifically, I think it is a matter of perception,” he said. “And this goes in line with what many other states are doing and what the federal law does as well and I think we need to be accountable to the public.”

Assemblyman James Ohrenschall questions whether a cooling off provision is a disincentive to run for office: