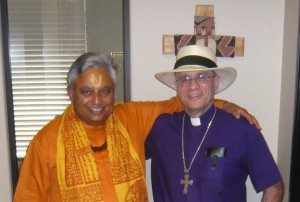 In a remarkable interfaith gesture, Hindu leader Rajan Zed will preside over the interfaith-panel at Episcopal Diocese of Nevada Convention to be held in Reno on October 14-16.

According to Right Reverend Dan T. Edwards, Episcopal Bishop of Nevada, theme of the Convention will be—“Who is my neighbor?” The interfaith-panel, consisting of a Muslim Imam, a Buddhist Priest, and a Jewish Rabbi, besides Rajan Zed (who is President of Universal Society of Hinduism), will engage in a dialogue around: How can we live as neighbors?

Episcopalians from all over Nevada, including both clergy and laity, will participate in this annual Convention, which discusses various developments, projects, proposals and other business of the Church in Nevada.

Episcopal Diocese of Nevada is a member diocese of the New York headquartered Episcopal Church of the United States headed by Presiding Bishop Most Reverend Dr. Katharine Jefferts Schori, who is chief pastor to the Church’s 2.4 million members in 16 countries and 110 dioceses.