By Sean Whaley,Nevada News Bureau: Lawmakers took time some away from the budget and other pressing issues today to honor former Sen. Bill Raggio, a fourth-generation Nevadan and the longest-serving member of the state Senate who retired earlier this year.

Raggio was surrounded by current and former colleagues as the Senate approved Senate Resolution 4 commemorating the Reno native’s 38-year service in the Legislature and inducting him into the Senate Hall of Fame. 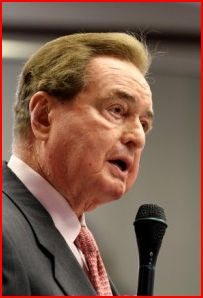 Raggio, 84, was first elected to the state Senate in November 1972, serving in 19 regular and 13 special sessions. He resigned in mid-term in January of this year citing health issues.

The Republican and former Washoe County District Attorney established the Senate Hall of Fame in 1989. The first inductee was the late Senate Majority Leader James Gibson of Clark County. Raggio is the 37th member of the Senate to be so honored.

Senate Majority Leader Steven Horsford, D-Las Vegas, recalled that while serving as an intern in the Nevada Legislature he was afraid of Raggio.

“I literally was so afraid of Sen. Bill Raggio that I avoided coming to the Senate chamber, because in many ways I was awestruck by his presence, his knowledge and command of the process, and his ability to get $20 out of everybody that he met,” Horsford said.

Raggio was known for “borrowing” $20 from colleagues and anyone else he could convince to hand over the cash.

“Sen. Bill Raggio is a true statesman,” Horsford said. “He loves his party, but he puts the state of Nevada before his party. He is a true statesman in that he has always looked out for the future of our state, providing great vision and leadership during difficult times.”

Sen. Mike McGinness, R-Fallon, who was selected to take over as minority leader from Raggio, said the former lawmaker also spent 18 years of public service in the Washoe County District Attorney’s office.

McGinness noted that Raggio had a “burning passion” for the job, a reference to Raggio’s burning of an illegal brothel east of Reno in 1960 while district attorney.

“Sen. Raggio’s unique knowledge of the state budget and the legislative process here in Carson City will never again be realized,” he said.

Raggio said he never imagined that he would serve 10 terms in the state Senate, but that in retrospect, he realized he spent nearly half of his life in the Legislature.

“As I said we’ve had tough times, and we’ve had some serious issues that we’ve had to deal with,” he said. “And obviously we’ve often disagreed. But in the end I always felt that the final result was in the best interest of the state of Nevada and I was privileged to be a part of that process.”

Raggio said his highest honor was earning his Eagle badge as a Boy Scout, but that his induction in the Senate Hall of Fame, “ranks right up there.”

Attending the ceremony were a number of former state senators, including Dina Titus, a Democrat who left the Legislature to run for and win a term in Congress in 2008. She lost re-election in 2010. Also on hand were Democrat Spike Wilson, a Reno attorney, Bernice Mathews, a Reno Democrat who was forced out in 2010 by term limits, and former GOP Lt. Gov. Lonnie Hammargren.

Raggio decided to step down in January citing difficulty in walking due to a severed Achilles tendon. But late in 2010, Raggio had been replaced as minority leader of the Senate Republicans following the November general election.

Raggio, who always worked across the aisle with Democrats, voted for tax increases to balance the budget on more than one occasion, including in the 2009 session, voting to override a veto from former GOP Gov. Jim Gibbons.

But what led to his ouster from leadership was his support of U.S. Sen. Harry Reid, D-Nev., in his successful re-election bid against Republican Sharron Angle.

Today was also “Old Timer’s Day” at the Legislature, with a number of former lawmakers visiting the Senate and Assembly chambers.

Senate Majority Leader Steven Horsford says he was “afraid” of Raggio while serving as an intern at the Legislature:

Former Sen. Bill Raggio says while he often disagreed with his colleagues, Nevada’s interests were always foremost in his mind:

Sen. Mike McGinness says Raggio’s knowledge of the budget and legislative process will never be duplicated: