By Sean Whaley, Nevada News Bureau: The Assembly worked late today meeting as a Committee of the Whole to review Gov. Brian Sandoval’s proposed budget for health and human services.

The review by the entire 42-member Assembly followed a similar session held in the Senate earlier this week.

The review took note of the nearly $50 million in “add backs” by the Sandoval administration to a number of programs run by the Department of Health and Human Services (HHS), including the restoration of $5 per resident day in Medicaid support for elderly Nevadans living in skilled nursing facilities.

Sandoval had originally proposed a $20 per resident day cut in Medicaid funding to skilled nursing providers. The amendment reduces the cut to $15 a day.

Amendments to Sandoval’s two-year, $5.8 billion general fund budget were sent to lawmakers earlier in the week.

In the Senate session on Wednesday, Majority Leader Steven Horsford noted that it will be up to lawmakers to determine where the $50 million in additional funding will be put to use in the budget.

The funding for the Wells camp has been recommended by Sandoval, prompting Horsford to suggest the add backs are largely aimed at insuring support for the budget from rural Republican lawmakers.

Other restorations proposed by Sandoval include funding for autism, mental health triage centers, mental health residential supports and $2.2 million for elder protective services rather than shifting the cost of this program to the counties.

Even with the program restorations, Democrat lawmakers in the Assembly continued to focus on the cuts that are still part of Sandoval’s budget, such as funding to support the operation of mental health courts.

Sandoval Chief of Staff Heidi Gansert said the mental health courts are not cut in the governor’s budget, but are proposed to be shifted to the counties to fund.

HHS Director Mike Willden said as he prepared his agency’s budget he focused on the retention of core services. The mental health courts, designed to keep the mentally ill out of jail, are valuable programs, but the funding from the state does not cover the operation of the courts, he said. 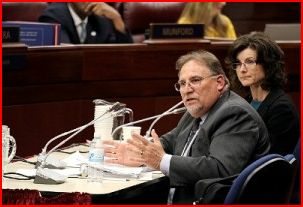 Mike Willden of the Department of Health and Human Services testifies in the Assembly today/Photo: Andrew Doughman, Nevada News Bureau

Instead, the state funding first implemented in 2003 provides psychiatric case workers to work with those with mental health issues in the court system to keep them out of jail and from committing further crimes, Willden said.

If the counties choose not to fund these caseworkers, then the courts could cease to operate, but the individuals would still be eligible for the pool of services available from the department, he said.

Senior Washoe County District Judge Peter Breen testified in support of funding the courts in the Senate and Assembly reviews. He said the program is far cheaper to operate then sending the mentally ill to jail or prison, saving $10 to $12 for every $1 of investment.

Assemblyman William Horne, D-Las Vegas, said Sandoval has talked of shared sacrifice, but the cuts in his budget will be borne disproportionately by people in need.

Assemblyman Steven Brooks, D-Las Vegas, urged the Sandoval administration to look at Nevada’s antiquated tax system, including the low taxes paid by the mining industry, rather than implementing some of the cuts in his budget.

The proposed budget is being balanced on the backs of those who can’t speak for themselves, he said.

Gansert said the budget will see some further revenues and restorations before it is finalized. The Economic Forum, a panel of private sector fiscal experts, meets Monday and is expected to forecast more tax revenues, she said. A separate review this week of the “minor” state tax revenues has already projected $72 million in additional funds, Gansert said.