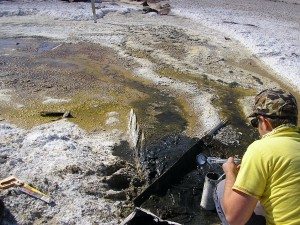 When one thinks of geothermal energy, a plume of steam rising from the snowy plains of Iceland or from a power plant in the green hills of New Zealand may come to mind, but perhaps not Nevada, a hotbed of activity for geothermal power in the United States.

The National Geothermal Academy, the first of its kind in the United States, is set for its inaugural summer session at the University of Nevada, Reno. Following an application process, a group of 40 students from around the country will be selected for the intensive eight-week geothermal energy education program.

The Academy is a consortium of top geothermal schools from around the country that have joined with the University of Nevada, includingCornell University, Stanford University, Southern Methodist University, West Virginia University, the Oregon Institute of Technology, the University of Utah and Dartmouth. The consortium is designed to transform and grow the national energy infrastructure to utilize America’s vast geothermal resource base. The academy will educate and train the next generation of scientists, engineers, plant operators and policymakers.

With its 20 years of geothermal research, development and exploration success, Nevada was selected by the consortium members to be the lead institution and the central site to host the Academy. The University of Nevada was awarded a $995,000 grant from the Department of Energy to develop and operate the Academy.

“Indonesia, New Zealand and Iceland have held similar academies, but this academy is the first in our country,” said Wendy Calvin, coordinator of the Academy and director of the University of Nevada Great Basin Center for Geothermal Energy. “Nevada has great local resources for the Academy. The consortium selected our school because of its proximity to drilling sites, power plants and heat sources, as well as for its leadership in multidisciplinary research that has led todiscovering new technologies for exploration, production and development of geothermal resources.”

Professors from the member schools, as well as professionals from the National Renewable Energy Laboratory, Thermasource and Western Cultural Resource Management will teach the nine individual week-long modules. Professors from the University of Nevada will also act as guest speakers at a number of the sessions. The course covers all aspects of geothermal energy development and utilization and is offered for either undergraduate or graduate credit, as well as professional development for the energy industry.

This new venture will effectively be the first university training program of its kind in the country, including industry collaboration to ensure specific and relevant expertise in geothermal is developed. The upcoming summer academy includes modules on exploration, drilling, policy, business principles and development, power plant design and construction.

Nevada leads the nation in the number of geothermal energy projects under development. Government and economic development organizations in Nevada have shown great support for the geothermal energy industry. Reno was recently named a 2010 Smarter City for Energy by the National Resources Defense Council, and the GEA ranked Reno fourth among world leaders in geothermal municipal development. Collectively, geothermal power plants in Nevada produce 300 megawatts of power, sufficient to provide electricity to more than 200,000 homes.

The Academy runs from June 20 to Aug. 12. The modules will be taught at the University’s Redfield campus with field trips to nearby local geothermal plants or geothermal exploration sites. For more information about the Academy, visit http://www.unr.edu/geothermal/NGA.htm.

BLM to close dangerous mine