Report suggests economic growth may soon be under way in Nevada

By Sean Whaley, Nevada News Bureau: While much of the economic news about Nevada is gloom and doom, a new report prepared for Secretary of State Ross Miller shows new business filings in the last quarter of 2010 turned positive for the first time since mid-2006.

The turnaround suggests the worst of the economic slowdown may be behind us, according to the report.

“Should historical trends hold true to form, general economic growth – including increased stability within the job market – should follow,” the report says. “When the new entity filings are charted with employment figures, it becomes clear that the new business filing statistics kept by the Secretary of State’s office may be a reliable leading indicator of future economic activity.” 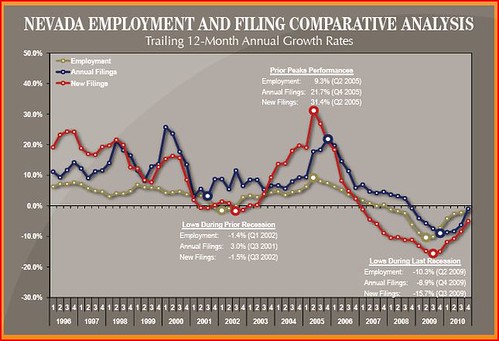 The report was prepared by Applied Analysis at Miller’s request.

According to Applied Analysis Principal Jeremy Aguero, the research firm has analyzed hundreds of economic indicators and concluded that new business filings reported by the Secretary of State’s office provide meaningful insight and may even be an early warning system of future economic instability. Aguero also indicated that since these data have not been reported on a recurring basis, they may have been overlooked in the past.

In the fourth quarter of calendar year 2010, the number of new business filings totaled 13,801, contributing to a 12-month tally of 55,082. The latest quarterly volume was 2.4 percent above the preceding quarter and 2.8 percent above the 13,429 reported in the same period of the prior year. 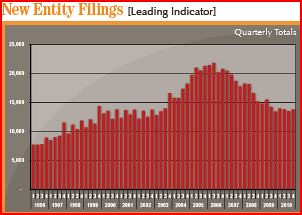 The report comes out as the Nevada Department of Employment Training and Rehabilitation reported this week that the state’s unemployment rate fell seven-tenths of a percentage point to 14.2 percent in January. The drop was not seen as positive for the state, however.

“Unfortunately, the decrease was not driven by significant improvement in the labor market” said Bill Anderson, chief economist for the department. “It appears likely that some jobless Nevadans are becoming discouraged and giving up their search for work and dropping out of the labor force. In addition, given stagnant population levels, it is also likely that some Nevadans are leaving the state.”

Anderson noted there are some signs of an improving economy, with the key indicators of visitor statistics, gaming win and taxable sale exceeding expectations. Rising gas prices could affect the number of visitors to the state, however, he warned.

The Gaming Control Board also this week reported the casino gaming win for January, showing a less than 1 percent decline compared to January of 2010. The 0.67 percent decline was based on $877 million in win statewide.

For the seven months of the fiscal year to date, gaming win is up 1.2 percent over the same period in the prior year.

The Applied Analysis review of the new business filings makes one other point: Increases in foreign filings picked up in the first quarter of 2010 and have remained ahead of the prior year. Foreign filings were up 29.6 percent over 2009.

“Increases in the number of new foreign filers helped offset declines reported by domestic filers, which were down 7.8 percent for 2010. During the year, foreign filings accounted for 7.4 percent of activity, relatively modest yet a notable increase from the 5.4 percent average reported in all of 2009.”

Applied Analysis is a Nevada-based advisory services firm founded in 1997, providing information and analysis to both the public and private sectors.