Record-breaking numbers of students rally against budget cuts at legislature

In what some say was the largest student protest ever held at the Legislature, more than

So what motivates record-breaking numbers of students representing all of Nevada’s universities and community colleges to swarm the state house?

Students repeatedly said they are “fed up” with budget cuts.

They are angry enough that 800 of them rode in a 15-bus, overnight convoy from Las Vegas to Carson City to tell legislators and the governor how upset they are. Hundreds of others bused in from across the state. 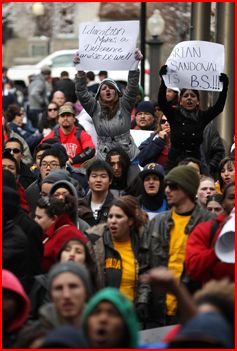 Here is what is troubling them: Universities could raise tuition 10 – 15 percent, lay off staff and faculty, eliminate programs and reduce course offerings to absorb Sandoval’s cuts.

News like that brought so many people to the people’s house that one student organizer called the scene “controlled chaos.”

At the Legislature, students packed the Assembly and Senate chambers, chanted “hey, hey, ho, ho, budget cuts have got to go” in the foyer, swarmed up and down stairs and crowded the hallways.

They thronged inside the Capitol building to demand an audience with the governor only to discover the governor was in a meeting. Later that afternoon, Sandoval shook hands and met with students.

One journalist Tweeted that a lobbyist grumbled about “disruptive” students. But students wanted to be heard.

“We’re almost being kicked when we’re down,” said Belen Figueroa, a University of Nevada, Reno freshman. “It hurts. When you’re kicked enough, you’re going to fight back, and this is people fighting back.”

Amelia Walsh, a 21-year-old junior at UNR, sat next to her 18-year-old friend Connie Anderson on a charter bus bound for Carson City. The two said they feared their institution was heading down the tubes.

“I was born here and my family is here, but if there’s nothing going for Nevada, why would I stay?” Walsh asked.

Anderson said she has watched Nevada’s leaders chop away at the budget since she was 13-years-old. As she progressed through high school, UNR became more expensive while offering fewer programs and services.

With that history and with Sandoval’s proposed cuts framing the debate, she did not hold out much hope.

“Even though this is the proposed plan, it’s basically the plan,” she said.

Walsh had a similar outlook. She said Nevada’s leaders do “whatever they want.”

“We’ve had rallies before,” she said. “We’ve had buses go down before. It’s important to show that we do care but I don’t know how much good it will do, unfortunately.”

Still, it was important enough for Walsh to board a Carson-bound bus on the first Monday after Spring break. This in an era of supposed youth apathy and ambivalence toward government.

“This year the fear has been more tangible than I’ve ever seen it,” said Sebring Frehner, president of Nevada State College’s student government. “This year I’ve actually seen school officials trying to control their shaking when they’re being told about these cuts.”

Many more students seem to be realizing the budget cuts affect them personally.

Walsh said that she’s under financial strain. She receives the Millennium Scholarship and her parents chip in, but she also spent Spring break working at Home Depot, where she works between 32 and 40 hours per week.

Students told stories like Walsh’s to legislators during a morning committee hearing. But Figueroa, who was sitting in the audience, was not impressed. She said she was even a little bit offended when two legislators seemed to be swapping jokes during student testimony.

“I don’t think disappointed is the right word, but I feel hesitant of the success of the rally,” she said. “…It really wasn’t getting through to them.”

That does not mean students are down and out.

“This single day will absolutely not bring about change,” Freshner said. “However, this isn’t the end of what we’re doing. This is the beginning.”