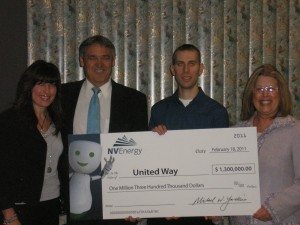 United Way of Northern Nevada and the Sierra (UWNNS) and United Way of Southern Nevada have received $1.3 million from NV Energy’s corporate sponsorship and employee donations to help further the non-profits’ community-based programs.

“We applaud NV Energy and its employees in their efforts to improve our community through their donation this year,” said Karen Barsell, chief executive officer and president of UWNNS. “As our largest employee and corporate supporter, we are able to utilize the partnership to better serve and support communities through beneficial programs to aid specific needs.”

The money raised during United Way’s campaign provides the organization with the means to find lasting solutions to social problems in the areas of early education, financial stability and access to healthcare and support for today’s safety net funding of immediate needs.

“NV Energy employees are some of the most generous people I have ever been associated with, and this year, at a time when Nevada needs us the most, I’m proud that our employees embraced the mission of United Way to benefit the communities throughout Nevada,” said President and Chief Executive Officer Michael Yackira.

BLM issues a decision for One Nevada Transmission Line project