BLM to close dangerous mine 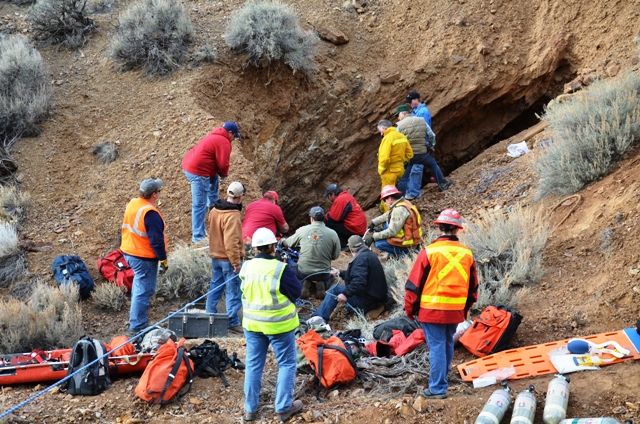 Rescue teams at abandoned mine site use down-hole cameras, self-contained breathing appartus and other state of the art rescue equipment to try to reach man who fell down the stope.

The abandoned mine shaft where an accident that claimed the life of a man in central Nevada is being permanently closed.  The closure is being made with the permission of the man’s family to prevent anyone else falling down the mine. Professional rescue crews made repeated attempts to reach the man, but rescue efforts were stopped after 48 hours because of the dangers to the rescue crews.  The man’s body will remain on site.

“This loss of life is tragic,” said Amy Lueders, BLM Nevada state director. “The BLM is committed to working with the Nevada Division of Minerals to identify and close these mine hazards on public lands. We are also committed to ongoing efforts to increase awareness of the ‘Stay Out and Stay Alive’ abandoned mine land safety campaign. No one should go into an abandoned mine.”

The efforts of the rescue crews were called “heroic” by Westenskow’s parents, who were at the mine during the rescue attempts. Westenskow’s death was pronounced on Friday around noon by the Pershing County Sheriff’s Office Deputy Coroner.

Federal and state agencies have inventoried and secured nearly 12,000 of the most hazardous mine sites around the state, but there are an estimated 50,000 sites that could be considered deadly.  In all, there could be as many as 325,000 abandoned mine features scattered throughout the state.

Nevada State law requires a mine claimant to fence and post danger signs on hazardous mine features.  The site has been under claim in the recent past.  Its current status is being determined.  There are more than 189,000 active mine claims on public lands in Nevada.

NOTE:  Photos of the rescue teams at the mine and the mine opening are available at the BLM Nevada website: http://www.blm.gov/nv/st/en.html.