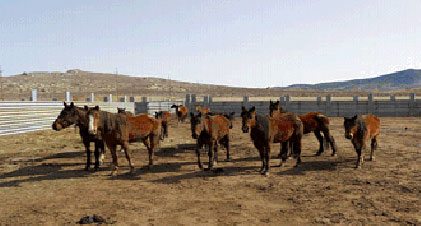 This week the Bureau of Land Management (BLM) initiated a four-year research project to test a longer-duration (three- to four-year) fertility control agent for wild horse mares at the Northern Nevada Correctional Center’s holding facility in Carson City, Nevada.  The pen trials will involve approximately 105 mares and 12 stallions.  The proposed study is needed to determine if the efficacy of the current Porcine Zona Pellucida (PZP) vaccine, an immunocontraceptive agent, can be extended from 22 months to three to four years.

The study is being conducted in collaboration with Dr. John Turner of the University of Toledo, who developed these fertility control treatments.  Increasing research efforts into fertility control is a high priority for the BLM, with the goal of having more tools available to reduce  population growth rates in wild horse herds.

What is PZP and how is it applied?

The PZP vaccines being tested prevent fertilization of a mare’s eggs. These vaccines do not affect the mare’s estrus cycles.  They have been proven safe for pregnant mares and, if a mare is pregnant, they do not affect the development of the foal.  In this trial, a longer-duration vaccine is being tested alongside the same types that are currently being used.  The research will consider the effects of these vaccines on estrous cycles.  None of the mares in the study are currently pregnant.

Five small time-release pellets containing PZP are injected into the large muscles of a mare’s hip.  The pellets release the PZP at varying intervals much like a time-release cold medicine for humans.  In addition to the time-release pellets, each mare receives a liquid “primer” vaccination that triggers an immediate immune response that lasts until the pellets start to be absorbed.  The mare’s immune system is expected to prevent conception following vaccine application.