Much of the growth will likely be in areas other than discretionary spending, however, the group noted in its release.

Statewide, December and fiscal-year-to-date taxable sales comparisons to the prior year are largely positive, with sales up 11.2 percent in Nevada in December and 4.9 percent for the fiscal year-to-date.

The review of the taxable sales data was authored by Applied Analysis, a Nevada-based firm providing information and analyses for both the public and private sectors.

The report shows that most of the significant growth is taxable sales activity – some of it in the triple-digit percentages and in the hundreds of millions of dollars – was generated in rural counties such as Elko, Esmeralda, Humboldt, Storey and White Pine. Sizable taxable sales gains in these counties are largely attributed to growth in sales related to utilities, mining and manufacturing equipment purchases.

So increases in taxable retail spending in rural jurisdictions appear to be less attributable to individual consumers, and more the result of rural industry investment. While still encouraging, much of this industrial investment is nonrecurring in nature. 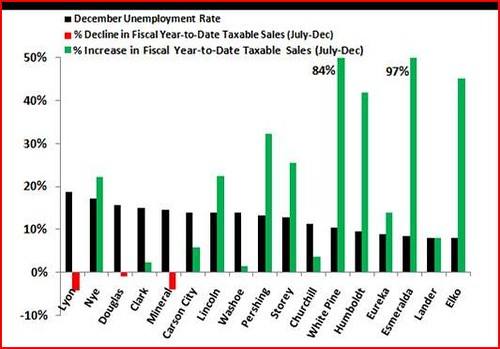 “With continued growth in mining and mining-related activities, it is likely Nevada will report gains in taxable sales consistent with national expectations for 2011,” she said. “However, it remains to be seen how much of that growth will be attributed to substantial improvement in consumer discretionary spending in our larger metropolitan areas, as opposed to relatively isolated growth occurring in our more rural areas.”

Based on seven consecutive months of national retail sales growth and better than expected holiday sales, the National Retail Federation (NRF) is projecting a 4 percent increase in retail industry sales (excluding automobiles, gas stations and restaurants) in 2011. However, the federation cautions that rising commodity prices and continued high unemployment could become obstacles to economic growth.

With the price of oil rising to a new two-year high this week as unrest in the Middle East escalates, concerns about potential stagflation conditions are not entirely without merit.

In December, Clark County reported increases in sales in accommodations and eating and drinking places of 13.7 percent and 17.6 percent, respectively.  However, high oil prices mean high gasoline costs and rising airfare, both of particular concern to the Nevada tourism industry. The tourism industry and visitor spending strongly affect retail sales throughout the state.