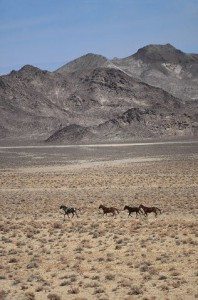 WASHINGTON, DC – Director of the Bureau of Land Management Bob Abbey today announced that following an extensive public process, the agency is accelerating fundamental reforms to how it manages wild horses and burros on public lands.

The proposed strategy announced today includes reducing the number of wild horses removed from the range for at least the next 2 years; reaffirming the central role that the National Academy of Sciences (NAS)’s on-going review of the program will have on science-based management decisions; increasing adoptions; significantly expanding the use of fertility control to maintain herd levels; and improving its care and handling procedures to enhance the humane treatment of the animals.  The BLM will continue to oppose the killing or slaughter of wild horses or burros as a management practice.

“We’ve taken a top to bottom look at the wild horse and burro program and have come to a straightforward conclusion: we need to move ahead with reforms that build on what is working and move away from what is not,”  Director Abbey said.  “To achieve our goal of improving the health of the herds and America’s public lands, we need to enlist the help of partners, improve transparency and responsiveness in the program, and reaffirm science as the foundation for management decisions.  It will take time to implement these reforms, but as a first step we are aiming to increase adoptions and broaden the use of fertility control.  And while we do this, we are reducing removals while NAS helps us ensure that our management is guided by the best available science.”
These reforms respond to the input of more than 9,000 members of the public who commented on last year’s Wild Horse and Burro Program Strategy Development Document through public meetings and written statements.

Specifically, the BLM proposes to:

NAS study—The BLM has commissioned the National Academy of Sciences to review previous wild horse management studies and make recommendations on how the BLM should proceed in light of the latest scientific research.  The NAS review is expected to be completed in early 2013.  Specifically the study will look at the methods for population modeling, the annual rates of population growth, fertility control methods, evaluation of carrying capacity of various lands to support wild horse herds, genetic diversity in wild horse herds, and predator impact on wild horse population growth.

Issue Procedures to Facilitate Long-term Care by Partners — The BLM will release within the next 30 days specific procedures by which members of the public can apply to enter into partnerships with the federal government for long-term care of wild horses that are removed from the public rangeland.

Increase Science-Based Fertility Control.  The BLM proposes to significantly increase the number of mares treated with fertility control – from 500 in 2009 to a target of 2,000 in each of the next 2 years during the NAS study, pending sufficient budget allocations.  Director Abbey said the BLM’s ultimate goal is to make various fertility control measures the primary means to maintain healthy population levels.  He said the BLM intends to work closely with the Humane Society of the United States to implement and monitor this expanded effort.

Reduce Removals – The BLM intends to reduce the annual number of wild horses removed for at least the next 2 years from 10,000 to 7,600 – a level that would essentially maintain the current number of wild horses and burros on the range. The NAS review would be completed in early 2013. Abbey said that while drought or other emergencies may require the removal of more than 7,600 animals, the BLM has decided to adopt this more conservative approach pending input from the NAS regarding the number of horses than can be safety and humanely left on the open range.
In addition, Director Abbey said the BLM will continue to strengthen areas on which it has already started.  These include:

Promote Volunteerism in the Management of Wild Horses. The proposal calls for increased engagement of the public by enhancing public outreach, recruiting local volunteers to assist in monitoring the health of the rangelands where animals roam, and encourages partnerships to increase herd-related ecotourism.

Improve Transparency and Openness. Director Abbey also said it is important to reaffirm throughout the agency the BLM’s fundamental commitment to transparency in all facets of the wild horse and burro program. This includes increasing public viewing opportunities during gathers and at short-term corrals and long–term care facilities to the highest extent possible without compromising the safety of staff, members of the public, or the animals. The BLM is also committed to the accurate, prompt, and public release of information related to the program.

An analysis of the public’s comments and a detailed proposed implementation strategy will be posted at www.blm.gov February 28, 2011.  The public is invited to review and provide comments to the BLM on this strategy through March 30, 2011, and should be submitted by email to [email protected] with “Comments on Strategy” in the subject line.

“This document reflects our commitment to work with all stakeholders to ensure that viable herds of wild horses and burros remain on our nation’s public lands for generations to come,” Abbey said.  “We share a common goal to improve the wild horse and burro program and the health of the public lands we manage.  Achieving this goal will require a determined focus on reform, new ideas, and opening a new chapter in the management of wild horses, burros, and our public lands.”

The BLM manages more land – more than 245 million acres – than any other Federal agency.  This land, known as the National System of Public Lands, is primarily located in 12 Western states, including Alaska.  The Bureau, with a budget of about $1 billion, also administers 700 million acres of sub-surface mineral estate throughout the nation. The BLM’s multiple-use mission is to sustain the health and productivity of the public lands for the use and enjoyment of present and future generations.  The Bureau accomplishes this by managing such activities as outdoor recreation, livestock grazing, mineral development, and energy production, and by conserving natural, historical, cultural, and other resources on public lands.

IHOP Stacks it up for Renown, a Children’s Miracle Network Hospital