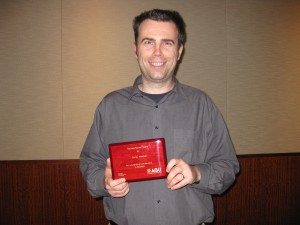 The American Geophysical Union presented University of Nevada Professor Corné Kreemer the Geodesy Section Award in December for his work on modeling how the Earth’s crust changes and moves.

University of Nevada, Reno’s Corné Kreemer received the 2010 Geodesy Section Award from the American Geophysical Union for his work on modeling how the Earth’s crust changes and moves.

“I am honored to receive this award,” he said. “The AGU is the largest Earth science association in the world, and each year the Geodesy Section gives the award to one person under the age of 40 for outstanding contributions to geodesy.”

The AGU honored Kreemer for creating a model of the entire world showing how much the crust deforms everywhere.

“I like to look at things globally; it gives you a larger perspective,” Kreemer said.

Kreemer, a 36-year-old research associate professor originally from the Netherlands. He is a faculty member of the College of Science’s Bureau of Mines and Geology at the University.  He chose to study geodesy, which measures the shape, rotation and gravity of the Earth, for a variety of reasons.

“I really like maps,” he said. “I also liked physics and geology of the natural world. That led me to geophysics.”

He earned his doctorate in geophysics from the State University of New York at Stony Brook. Within the field of geodesy, he studies plate tectonics by using GPS.

“It’s important for seismic hazards,” Kreemer said. “Earthquakes happen where plates meet. I see how the crust’s surface changes over time, see how the plates move. With GPS, we can infer which faults are more dangerous than others.”

In 2004, Kreemer came to the University of Nevada to analyze GPS data from Yucca Mountain to see if it was deforming. Now, he analyzes data on a state and international scale.

“In Nevada, there are a lot of faults,” he said. “This is an area that actively deforms – a natural laboratory.”

The University also serves as a place for global research.

“There’s a good group here at the University,” Kreemer said. “We analyze the largest set of GPS data from around the world by far.”

Kreemer serves on a national facility advisory committee, which promotes the use of GPS in geoscience research and education. He also serves on working groups for the International Association of Geodesy and EarthScope’s Plate Boundary Observatory.

AGU is dedicated to the furtherance of the geophysical sciences through the individual efforts of its members and in cooperation with other national and international scientific organizations.

Nevada’s land-grant university founded in 1874, the University of Nevada, Reno has an enrollment of more than 17,000 students. The University is home to one the country’s largest study-abroad programs and the state’s medical school, and offers outreach and education programs in all Nevada counties. For more information, visit www.unr.edu.