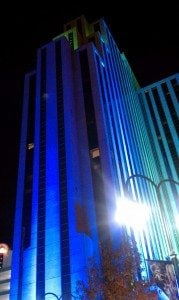 What started as a push for the University of Nevada has turned into overwhelming support for a new, star-studded branding campaign at Silver Legacy Resort Casino. Since late November, the typically green-lit façade of Silver Legacy Resort Casino has been turned blue, first in response to a call for downtown properties to show support of the successful 2010 Wolf Pack Football Team from Reno Mayor Bob Cashell.

“We received a mountain of positive feedback on the color change, not just from Nevada Athletics supporters but from the community and our guests in general,” said Gary Carano, General Manager of Silver Legacy Resort Casino. “We decided the blue lights would stay to match our new branding campaign, which includes the Star Rewards Program and the recent completion of our $15 million dollar renovation project.”

Silver Legacy’s Star Rewards was launched in September 2010 as a player’s club that treats guests like stars by allowing them to choose how to use what they earn, from FreePlay to dining comps to limousine services, concert tickets and more. All Legacy Star Rewards cardholders have the option to easily check their FreePlay points and comps as well as choose their Club preferences at any Legacy Star Rewards kiosk and it’s free and easy to sign up and get started.

The overhaul of nearly 1,700 guest rooms and suites is also a part of the campaign, which was the final phase of a $15 million dollar renovation project completed in mid-December. Each Silver Legacy room now features a sophisticated new look and feel to enhance guests’ comfort, including modern furniture, sleek plush carpeting, fine linen bedding with triple sheeting and damask throws, new 32” and 37” LCD televisions and ergonomically designed desks.

A decision to keep the outdoor lights blue was made shortly after the Nevada Football Team defeated Boston College in the Kraft Fight Hunger Bowl on January 9 and also represents Nevada’s state color. “The blue is a beautiful color and matches the glamorous new features inside Silver Legacy,” says Carano. “Ultimately, it all adds up to us helping each of our guests feel like a rock star while they’re with us.”

For more information on all Silver Legacy’s hot features visit www.silverlegacy.com or download Silver Legacy’s free iPhone and Android Applications to take virtual tours, view nightlife schedules and book a stay today. Further details can be found on Facebook, Twitter and YouTube or by calling 775-329-4777.

Sheriff’s Office Detectives Arrest a Male for Stealing $50,000 in Furniture