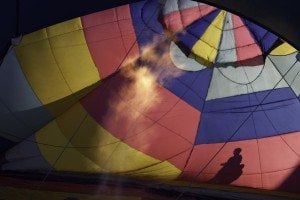 The Great Reno Balloon Race will be proudly showing its colors for the event’s 30th anniversary this Sept. 9, 10 and 11. This year’s milestone event promises lots of surprises for friends and family, but it can only happen with the support of the community through sponsorships, which are available now.

“The Balloon Race has been such a special part of the community for three decades,” said Pilar Aldecoaotalora, Board President. “This is why sponsorships are so important. We wouldn’t have the same spectacular event if it wasn’t for the support of our sponsors.”

In addition to a one-of-a-kind experience, all sponsorship levels are a great way to show client or employee appreciation, celebrate a birthday or anniversary,  promote company team-building and support this one of a kind community event. Sponsorships, which range from a $899 Family Sponsorship to the customizable Major Sponsorship, are truly the only way to fly during the event. Sponsors who sign up early will receive recognition in the Balloon Race e-newsletter and Balloon Race Web Site as an early sponsor.

Event officials are also excited to announce the addition of a new sponsorship opportunity, the One-Day Sponsorship at $399, which gives sponsors the opportunity to fly on any one day of the Balloon Race while helping make a difference for the event.

The celebration will take place at its traditional location, Rancho San Rafael Regional Park. The Balloon Race, which began with just 20 balloons in 1982, has grown to showcase more than 100 balloons and pilots from as far away as New Zealand and Switzerland. On average, 150,000 spectators from all over the world come to share in the wonder of this three-day event, which has continued as a free event for 30 years only due to generous sponsor support. For more information about sponsorships, the 2011 event or to make a donation, call the Balloon Race hotline at (775) 826-1181 or visit www.renoballoon.com.