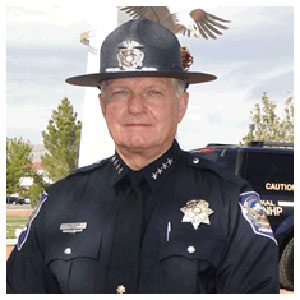 CARSON CITY — Governor Jim Gibbons today announced the retirement of Department of Public Safety (DPS) Director Jerry Hafen. Hafen is a life-long resident of Clark County and was appointed to the top job at DPS in early 2008.

“Jerry Hafen has proven to be a respected leader in law enforcement in Nevada and I am proud of his accomplishments as DPS Director,” Governor Gibbons said, “Jerry has proven time and again that the safety of the citizens of Nevada is his top priority.” Governor Gibbons added, “Under Director Hafen’s watch, the Department has made numerous progressive moves to modernize their mission and engage other law enforcement agencies and citizens, all making Nevada a safer and better place to live.”

“I am proud to have served for Governor Gibbons and the people of Nevada,” Director Hafen said, “I am equally proud of all the sacrifices made by the hardworking men and women of the Department of Public Safety to serve the citizens of Nevada.” Hafen added, “I am also grateful for the relationships I have developed with sheriffs and chiefs throughout the state, as well as the heads of federal law enforcement agencies. It is truly a team effort to serve and protect the people of Nevada.”

Under Hafen’s tenure, the Department of Public Safety started a K-9 Unit using donated funds and money seized from major drug traffickers. The K-9 Unit and other programs implemented by Hafen are largely responsible for the disruption of drug trafficking operations, numerous drugs arrests, as well as the seizure of millions of dollars in illegal drugs and cash throughout the state. Hafen also oversaw the creation of an anti-terrorism Fusion Center in Carson City, integration of Homeland Security into the Nevada Division of Emergency Management, training improvements and use of new grant funding to better train and equip staff in all DPS Divisions, introducing a massive new records management system, and standardization of DPS policies to make DPS staff more efficient and accountable.

In 1995, Hafen moved to the Department of Public Safety’s Investigation Division as a criminal investigator. During Hafen’s tenure with the Department, he has worked on investigations of criminal related activity pertaining to homicide, auto theft, narcotics enforcement, theft and fraud, sexual assault, organized crime, political corruption and internal affairs. In 2003, rising to the rank of DPS Deputy Chief, Hafen supervised and administered operations for the Division’s statewide Narcotics and Major Crimes Units.