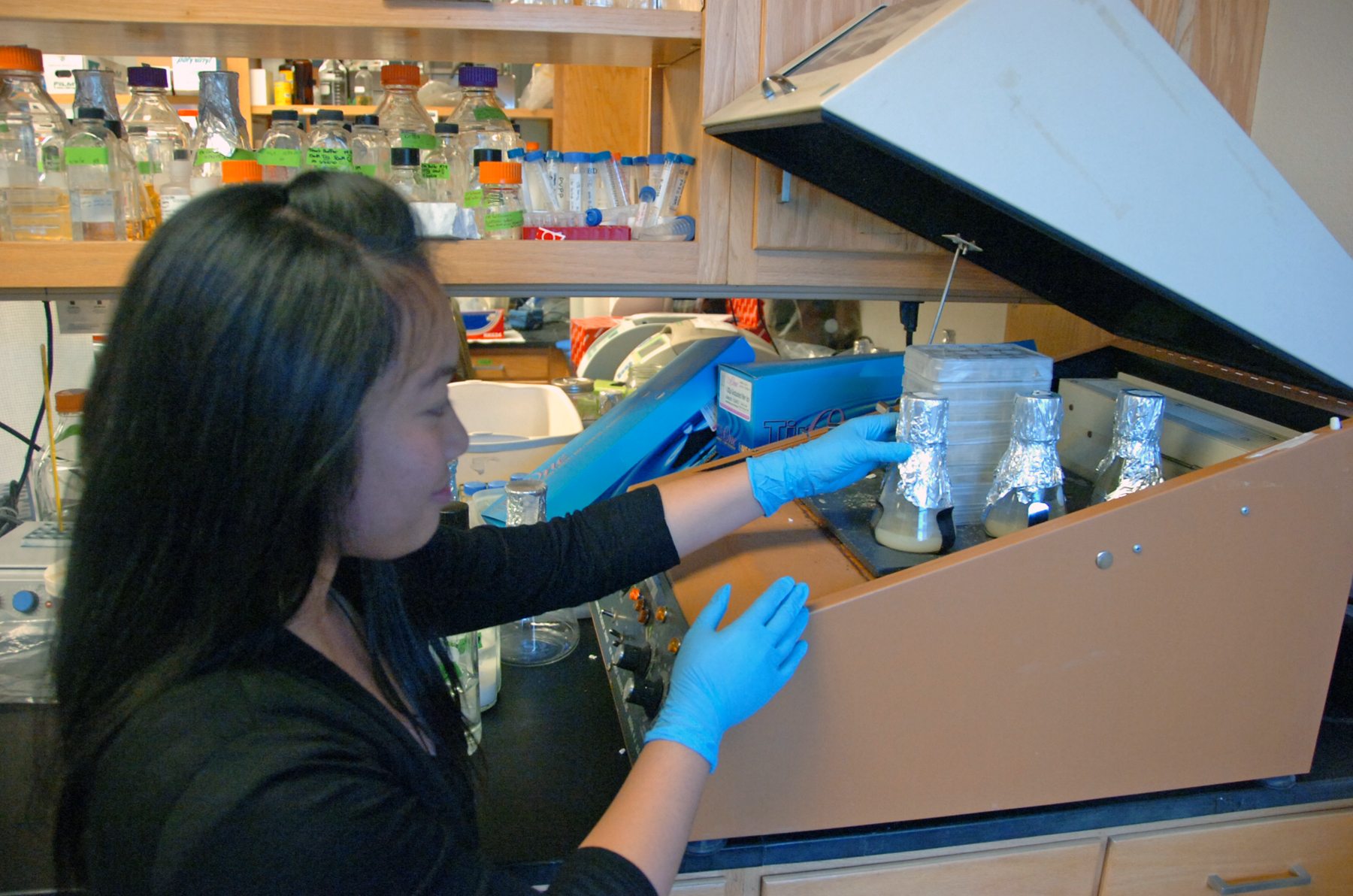 University of Nevada, Reno undergraduate student Elaine Bersaba checks the synthetic biology experiment in preparation for the international competition this week at the Massachusetts Institute of Technology.

Ten students from the University of Nevada, Reno will be presenting their work on plant biosensors at the International Genetically Engineered Machine Competition, iGem, Nov. 4-8.

Teams from top universities around the world choose a research project within the field of synthetic biology, and have little more than a summer to run experiments and prepare their data before presenting their research at the annual competition at the Massachusetts Institute of Technology.

In past years iGem competitors have worked exclusively with bacteria, but this year Harvard, Purdue and the University of Nevada, Reno chose to conduct their research on plants. Nevada is focusing on creating plant biosensors using tobacco.

“Plants are able to sense the environment around them, and create signals indicating stress,” Matt Polasko, a team member, and a biochemistry and molecular biology major, said. “Usually these early signals are not easily recognizable by humans so we’ve taken the genes that detect the environment and have created a signal that a human can understand, such as having the cells glow in response to stress inducers, such as cold.”

The team has been working with tobacco plant cells because they have proven to be a reliable test model and take less time to obtain results at the cellular level than it would take to test a fully-grown crop plant.

“The students have successfully engineered the tobacco to show a bright red fluorescence when put under cold stress,” Christie Howard, faculty advisor and professor in the College of Agriculture, Biotechnology and Natural Resources, said. “We’re excited and quite happy with the results.”

The Nevada team has two biochemistry faculty advisors, Christie Howard and David Shintani, who are responsible for advising the team throughout the competition.

“A great thing about the iGem competition is the independence,” Elaine Bersaba, a team member and undergraduate student majoring in biochemistry and molecular biology, said. “Dr. Howard and Dr. Shintani advised us, but we pretty much took control of our own projects.”

The iGem team started planning the competition in April, and then worked on their projects in the summer and fall. Each person within the team had their own tasks that contribute to the project, and would report their progress at weekly meetings.

“For awhile these meetings were frustrating,” said Matt Polasko. “None of our projects seemed to be working, and then suddenly around August, everything started to work. It was great seeing positive results from our work.”

One byproduct of the Nevada’s iGem teamwork is that the competition will help attract undergraduate students to the University of Nevada, Reno because it highlights research opportunities at the University.

“It is important to create research opportunities for future Nevada students, and iGem is a great way to get Nevada competing at an international level,” Polasko said.

Last year was the first time a team from the University entered the competition, and they took home a bronze medal for their work in genetically modifying bacteria with cinnamon to make a natural mosquito-killing insecticide. The majority of funding for these projects has been through Nevada iNBRE (IDeA Network of Biomedical Research Excellence), which promotes undergraduate research opportunities throughout the state of Nevada.

“This year we have a good chance to bring home a gold medal,” Howard said.