RENO, Nev. – With fall upon us, hordes of children recently got a taste of their first “agricultural experience” – a trip to the pumpkin patch. Other city slickers are opting for a weekend in the wine country, venturing to nearby vineyards, blazing in colors of the sunset and buzzing with fall harvest activities.

As agritourism, farmers’ markets, and the organic and slow-food movements have taken off, so has a renewed interest in America’s agriculture. So, the time is ripe for a field guide to California’s most consistent economy – agriculture, consisting of more than 75,000 farms and ranches. Two University of Nevada, Reno Foundation professors have teamed up to produce a fact-filled, entertaining, practical guide to California’s production of almost 400 different crops, which has created “the most dramatic modern agricultural landscape in the world,” as the authors argue in the book’s preface. 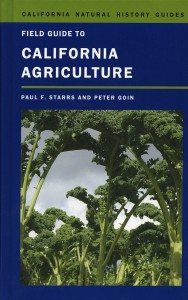 engaged in a labor of love, as their respect for the industry, its people and the agriculture’s many faces shine through in the 506-page book.

In the book’s preface, Starrs explains, “Believe us: we, too, try to share our love for the eccentricity and possibility of California. All those miles, all those conversations (routinely in Spanish, which we both speak with some fluency), have brought agriculture to life.”

Starrs’ lively and thoughtful writing and Goin’s eye-opening and often humorous photographs transform the book from simply a factual “catalog,” useful to academics and those in the industry, to an enjoyable survey for a general audience that tells a story of heritage, culture and social significance.

“Anyone driving through California will see and understand so much more with a copy of the guide lodged on their car dashboard, ready for consultation,” Starrs said.

“I was particularly struck by the diversity of the crops,” Goin added, “but also of the people in the industry and those who work the fields. California has so many specialty crops partly because of the state’s ethnic diversity and global markets. Think chili peppers, pomegranates, pistachios, prickly pear and pima cotton. It’s a visual and culinary feast.”

The guide covers California’s array of diverse crops and animal products, from chestnuts, cheese and cherries, to cabernet, cattle and cannabis (marijuana). The authors document that marijuana is certainly the state’s largest-value crop and is “a crop fundamental to the economy of the Emerald Triangle, a tricounty area in northwest California that includes Mendocino, Humboldt, and Trinity counties.” They also note that the crop is produced in commercial quantities in all but seven of the state’s 54 counties.

The bulk of the book’s pages are taken up with a survey of crops, but the book also contains a historical overview, a section on the state’s agricultural regions, and a dramatic gallery of larger-format photographs, The Paradox and Poetics of Agriculture.

This is not the first time the artist and the geographer have worked together on an interdisciplinary project. They worked together to produce Black Rock in 2005, a beautiful book that offers a lyrical and poetic vision of a rugged region of desert and mountains in northern Nevada.

Both Starrs and Goin are well-traveled, spending much time abroad as children, but with deep roots in and appreciation for California’s agriculture. Goin’s family includes long-standing Californians, and his father worked as a seasonal farmworker in the lemon groves during his time at UC Berkeley. Starrs is a resident of both Nevada and California and has spent much time traveling and discovering the back roads of California. He can still ride, rope and brand, having worked as a ranch hand watching over several hundred cattle and calves grazing high-altitude rangelands.

The two are explorers at heart, meeting in Reno during the 1997 flood, “hiking along the Truckee, knee-deep in water,” Goin said. “He was scouting, and I was capturing a moment in Reno land and life making photographs.”

The rest is history, and an example of one great interdisciplinary partnership.

How marijuana use has changed during COVID-19