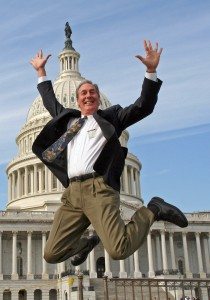 Nevada Professor of the Year Scott Mensing, of the University of Nevada, Reno, jumps for joy after receiving his award from the Carnegie Foundation in Washington, D.C. today. Photo courtesy of Scott Mensing.

University of Nevada, Reno Professor Scott Mensing has just been named Nevada Professor of the Year for 2010 by the Carnegie Foundation for the Advancement of Teaching and its partner in the awards program, the Council for Advancement and Support of Education. He received his award today in a ceremony in Washington, D.C.

The U.S. Professors of the Year program salutes the most outstanding undergraduate instructors in the country – those who excel in teaching and positively influence the lives and careers of students.

Mensing, a biogeographer and paleoecologist with a doctorate in geography, has been teaching since 1987. He began as a graduate student instructor at U.C. Berkeley and joined the University of Nevada, Reno College of Science faculty in 1993. He makes effective teaching sound simple.

“I have two basic premises: motivate and engage the students; and don’t assume that people understand what you’re saying,” he said. “If the students aren’t engaged, I’m disappointed. In a lecture class there must be activities to keep students focused, and I try to use the class time to get them thinking by developing an exercise where they can demonstrate understanding of a principle and then apply it.”

He said workshops and seminars over the years have helped improve his teaching – he likes to attend and get ideas.

“I steal teaching ideas like crazy, adopt and adapt them – but I do have a few ideas of my own,” Mensing said. “I strive to make teaching visual, not just showing but doing. Sometimes you have to get them off balance, which means I may do some goofy stuff in class. We can be too formal, which can create a distance between you and the students. It’s important that we meet as colleagues.”

Mensing’s success comes from more than classroom sessions. Kate Berry, the chair of the University’s geography department, said Mensing has a tremendous commitment to education, participates in outreach to K-12 and does “dynamite” research. This award is about teaching, but also service and research, she said.

“He’s an all-around university citizen,” Berry said. “He completely deserves this nationally recognized award. He’s hands down, the best teacher I’ve ever met – and a well-rounded scholar. He’s an important mentor to his peers, who raise their own expectations because they see what’s possible.”

Mensing’s research focuses on the progression of ecological change over time through reconstructing vegetation and climate change and studying interaction between ancient and their environment from about 15,000 years ago up to the present, fire history, the invasion of exotic species and early agriculture.

Over the years, Mensing has been honored with other distinguished teaching awards. In 2007 he received the Regents Teaching Award, an annual award presented by the Nevada System of Higher Education to the professor throughout the entire system with the most distinguished teaching record. In 2006 he won the F. Donald Tibbitts Distinguished Teacher Award, which is the University’s highest teaching honor. In 2005 he received the LeMay Award for Excellence in Teaching, which is awarded to the top instructor in the College of Science.

“Receiving awards like these, it makes me feel that every time I teach, it better be award-winning caliber,” he said. “I’ve always had the attitude that when I walk into class it should be the best class I’ve ever had. I know it’s not possible every time, but for me, I’m disappointed if I don’t at least start with that attitude.”

“It’s an honor for me to be nominated by the provost,” Mensing said. “It makes me work harder to live up to the expectations the awards convey.”