Three University of Nevada students account the “journey to our generation’s defining moment” at D.C. rally 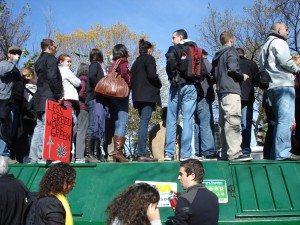 Thousands of attendees at the Jon Stewart and Stephen Colbert Rally to Restore Sanity and/or Fear were blocked from good seating and desperate for a view, stood on something tall, such as the portable lavatories. Photo provided by student journalists from the Reynolds School of Journalism.

From Friday afternoon to early Sunday morning this past weekend, three freshman journalism students from the University of Nevada, Reno were quickly transformed into real-world journalists at the Rally to Restore Sanity hosted by The Daily Show’s Jon Stewart and the March to Keep Fear Alive hosted by The Colbert Report’s Stephen Colbert at the Washington Monument in Washington D.C.

Donica Mensing, associate professor of the Reynolds School of Journalism, asked journalism students interested in attending the rally to write essays on why he or she should be chosen to represent the University and report in Washington D.C. during the Rally for Sanity and/or Fear. After reviewing the entries, Mensing and her co-instructor, Dean Jerry Ceppos, chose the candidates: freshmen Kimberley Mahoney, Molly Moser and Max Wynne.

“We were discussing the rally in my Journalism 101 class and it occurred to me that it would be fun to actually send students to cover it,” Mensing said. “It grew from an in-class inspiration.”

Expenses for the three students were covered by donations collected specifically for this trip from faculty and alumni. The students shot photographs and videos, tweeted and reported to their blog entitled, “Fearful Yet Sane, Three college journalism students’ journey to our generation’s defining moment” during and after the rally. They also took notes on what it was like to be a journalist at an event of this magnitude.

“This was a wonderful opportunity to go beyond just getting our feet wet,” said Mahoney. “We jumped head first into a pool with nothing but a few instructions and one another to keep us company.”

“We interviewed people who were outside of the rally and took photos demonstrating just how desperate people were just to see Stewart and Colbert,” Moser said. “This adventure gave me a taste of what the journalism career is like-and I enjoyed it.”

The rally was broadcast live on Comedy Central. Two of the University’s journalism classes came together Saturday in the journalism school to watch the rally and present class projects. Writing Lecturer and Website Content Generator Deidre Pike had her class create public relations and advertising campaigns on Colbert’s rally for fear and Mensing’s class identified issues, along the theme of Stewart’s Rally, which they classified as sane or insane.

“This is an opportunity for the University to expand its scope and hopefully attract more students, especially to the (Reynolds) School of Journalism,” said Wynne. “To have the school sponsor and send students across the country to cover political rallies is a definite draw to prospective applicants. I hope this generates more projects of the same variety.”

Blog entries from the three journalism students who attended the rally, including photographs, can be found at http://unrjour101.blogspot.com/.

How to cure local news without accidentally poisoning it (opinion)

Targeting of journalists by police must end (opinion)

Dangerous Nevada: How the Silver State was victimized by bad...