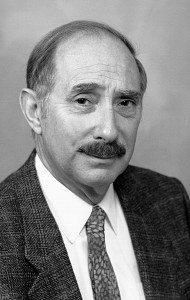 The world water crisis is exemplified by the changes at Lake Tahoe over the past three decades, and is directly linked to climatic change, world-renowned limnologist Charles Goldman said. He will present a lecture on the topic, “Lake Tahoe: Five Decades of Change and the World Water Crisis,” on Thursday, Dec. 2 as part of the College of Science’s Discover Science Lecture Series.

Goldman, recently welcomed as an adjunct professor at the University of Nevada, Reno, has been the leading researcher at Lake Tahoe since 1958 as a distinguished professor at the University of California, Davis and the inaugural president of the World Water and Climate Network established in Kyoto, Japan in 2003. He has received dozens of national and international awards and accolades for his research that spans such climate and environmental extremes as Antarctica and Africa.

“Freshwater and marine ecosystems are now threatened on a global scale,” Goldman said. “The decline in water quality is rapidly becoming one of the most important global problems to be faced this century.”

Goldman is one of five renowned scientists from around the country who will bring their knowledge to the Reno community in a series of lectures at the University of Nevada, Reno’s Davidson Mathematics and Science Center.

“Science encompasses a wonderfully diverse collection of explorations into the unknown,” Jeff Thompson, dean of the College of Science, said. “Join us and experience the extent of the science universe as the best scientists on the planet visit Nevada for our Discover Science Lecture Series.”

Other topics and speakers in the lecture series include:

All lectures will be held at 7 p.m. in the Redfield Auditorium, Davidson Mathematics and Science Center at the University of Nevada, Reno. Admission is free. For more information call 775-784-4591 or visit www.unr.edu/cos.

Art at The Hub