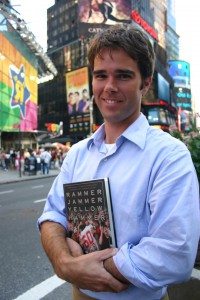 This summer, incoming freshmen at the University of Nevada, Reno were given a copy of Warren St. John’s “Outcasts United: An American Town, A Refugee Team and One Woman’s Quest to Make a Difference.” At their welcoming day in late August, the students engaged in discussions of the book with other students, faculty and staff as part of the Summer Scholars Program designed to help freshmen connect with their new campus community. Students, as well as members of the community, will now have the opportunity to talk with St. John when he visits the Nevada campus Nov. 16.

St. John will address students and other attendees at the free public presentation at 7 p.m. in the Fourth Floor Ballroom of the University’s Joe Crowley Student Union. The youthful, personable author will take questions from the audience following the presentation and then sign books at a reception at 8 p.m.

Dick Davies, longtime history professor at the University who recommended “Outcasts United” for the summer reading assignment and has corresponded with St. John, has always had the feeling that St. John would be an excellent public speaker, the type of friendly, funny, engaging and insightful person that could just as easily be a great dinner guest. “He’s absolutely funny, a very talented writer,” Davies said. “There are all sorts of themes in the book – immigration, racism, assimilation, the fact that this is a Muslim woman coach and most of the boys didn’t want to play for a woman, gender issues.”

In “Outcasts United,” St. Johntells the story of a refugee soccer team in Clarkston, Ga., coached by an American-educated Jordanian woman.

“The book turns immigration in this country on its head. St. John looks at it from the point of view of the immigrant rather than the United States responding to the issue,” Davies explained. “These are people coming from Somalia and Bangladesh and Iraq and Afghanistan. These are not Democratic or Republican, liberal or conservative, issues. These are human issues.”

First published in the United States in April 2009, “Outcasts United”won high acclaim and was subsequently published in the United Kingdom, the Netherlands, Germany, Italy, Japan and China. St. John’s first book, “Rammer Jammer Yellow Hammer: A Journey into the Heart of Fan Mania” (2004), was named one of Sports Illustrated’s best books of the year, and ranked number one on The Chronicle of Higher Education’s list of the best books ever written about collegiate athletics. The talented and versatile author has also written for The New Yorker and The New York Times.

The 7 p.m. presentation and 8 p.m. reception and book-signing at Nevada are free and open to the public. The winner of the Summer Scholars Art and Essay Contest will also be announced at the 7 p.m. presentation. Students were invited to create projects illustrating the themes of the book and submit them to the contest, with a first prize of $500 up for grabs.

Free parking will be available on a first-come, first-served basis on the top level of the Brian J. Whalen Parking Complex beginning at 6:30 p.m. For more information on the event, call the University of Nevada, Reno Provost’s Office, 775-784-1740. Arrangements for the appearance of Warren St. John made through Greater Talent Network, Inc., New York, NY.