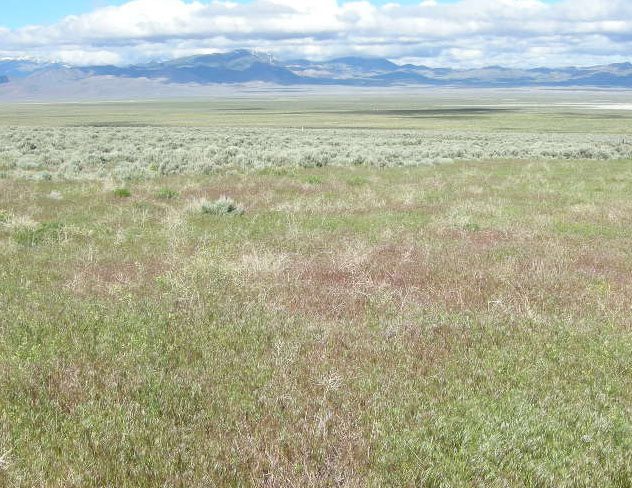 “Several theories have prevailed through the years regarding cheatgrass,” said Jerry Smith, District Manager for the Bureau of Land Management’s Battle Mountain District.  “You had to graze it in the spring when it was green, once it dried out, it had no nutritional value to livestock, and cows won’t eat dry cheatgrass.”

“Now, an experiment by University of Nevada Scientists, Dr. Barry Perryman and Dr. Ben Bruce, dispels these theories,” said Smith.   ”Dr. Perryman, who is a member of the BLM’s Northeastern Resource Advisory Council, demonstrated that cheatgrass can be significantly reduced with the use of fall grazing.  I believe it is important to bring the research to the attention of the public.”

“In subsequent years, we reduced the cheatgrass to less than 90 lbs.,” Perryman said.  “With the reduction in wildfire potential, came improvement in perennial grass production.  Over the course of the study, production of perennial grasses increased from 45 lbs. per acre to 577 lbs. to the acre.” 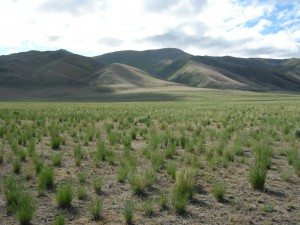 Perryman and Bruce began the research to investigate whether or not previously held theories regarding cheatgrass were true.  Only grazing cheatgrass when it is green seemed like an impractical solution for large-scale control, according to Perryman.

“You can’t get enough animals to graze it all, you don’t know when it is going to be green, making it difficult to plan, and you don’t know how many animals to bring to an area before it is too late,” said Perryman.

“The protein content and energy of cheatgrass in the fall is at least as good, if not better, than perennial grasses.  And the results were consistent through the four-year study,” said Perryman.   “We analyzed the cheatgrass in the lab.  The protein level fluctuated between 3.5 percent and 6 percent, but never went below the 3.5 percent.  Energy levels measured 45 percent and above. “

Perryman and Bruce began their research by shifting the calving cycle to later in the season.  They found that using this system would benefit ranchers, the rangeland and other wildlife.

“Fall grazing is of great benefit to ranchers, giving them another source of forage that previously was not considered nutritious,” said Bruce.  “Also, decreasing cheatgrass increases perennial grass growth.

“We made sure that the cows were in the second trimester before putting them on a cheatgrass diet. This time in their production cycle is less nutritiously damaging.  We supplemented their diet with Anipro liquid protein just as ranchers do when grazing with local perennial grasses in the fall,” he added.

Bruce pointed out that liquid protein supplement not only stimulates the cattle’s appetite, but also keeps them in a specific area where the cheatgrass is located.

“Protein stimulates the microbes in the rumen and increases the cattle’s appetite to consume the cheatgrass,” said Bruce.  “When we entered the study, we didn’t know what condition the cows were going to be in after 30 to 60 days of a cheatgrass diet.  We didn’t want them to lose weight.  We found that the cows either maintained their weight or gained weight.”

Perryman and Bruce maintain that fall grazing will help reduce the fire danger and the spread of cheatgrass.

“Fall grazing is more logical because the cows consume it all the way including the litter, thus helping reduce cheatgrass the following years.  It’s also easier because you know where the cheatgrass is and how much of it there is,” said Perryman.  “You can decide when you want to graze it, you can measure how much forage there is, which then allows you to determine how many cows you can put there and for how long.  In our research, we couldn’t find a downside to fall grazing.  The results were all positive.”

To Jerry Smith, who has dedicated his 34-year career with the BLM to managing natural resources, the research shows great promise in the fight against cheatgrass.

“Cheatgrass presents a hazard from two perspectives,” said Smith.  “It comes up earlier than most perennial grasses, stealing resources like water and nutrients needed by other grasses, which provide forage for wildlife.   Secondly, once cheatgrass dries, it is highly flammable and becomes a fire hazard.”.

“According to our records, during the last four years nearly four million acres burned in Nevada,” said Smith.  “Cheatgrass was a contributing factor to large fire growth in 85 percent of these fires.  Furthermore, cheatgrass invades burned areas.  For example, a single stalk of cheatgrass can produce 1,000 seeds, and a single acre may contain hundreds of thousands of these plants. The BLM estimates that cheatgrass invades 4,000 acres a day.  The research that Dr. Perryman and Dr. Bruce conducted is valuable in providing another method to win the fight against this invasive grass,” said Smith

Doug Furtado, Field Manager for the Mount Lewis Field Office, agrees with the research results, but points out that it is important to remember that effective grazing of cheatgrass must be accompanied and supported by the appropriate level of livestock management.

“Successful grazing to reduce cheatgrass must be well planned, targeted to manageable areas and supported by the permitee and the BLM in order to ensure that the appropriate control of livestock exists to meet the desired outcomes,” said Furtado.

Cheatgrass is a common name given to downy brome, by western farmers who thought they had been given impure seed when the downy brome started spreading into their wheat fields.

Cheatgrass is an invasive species that began spreading quickly during the late 19th and early 20th centuries, displacing native plants.  It can produce more than 10,000 plants per square yard and is highly flammable.

By 1920 to 1930, cheatgrass had become the most invasive range grass in the western United States.  It is currently the dominant species on more than 100 million acres of land in the intermountain West.

Doing away with prevailing theories about cheatgrass through scientific research gives ranchers, rangeland conservationists and wildland fire managers hope that the war on cheatgrass is on the way to being won.