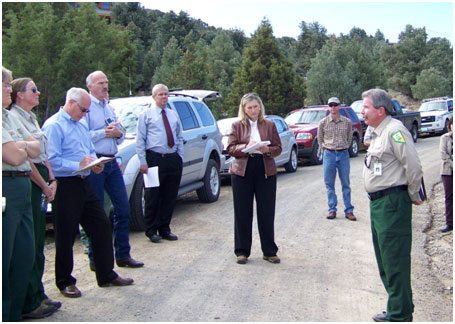 Hosted by USDA Natural Resources Conservation Service State Director Bruce Petersen, the tour and public meeting with Sherman highlighted the issues associated with high density stands of pinyon and juniper, such as risk of catastrophic fires, reduced wildlife habitat for species like sage grouse and mule deer, and reduced forest health.  Sherman oversees the Forest Service and NRCS, the USDA agencies responsible for managing the public forests and working with private landowners to protect the environment.

Sherman recognized Senator Harry Reid for a letter he sent to the Secretaries of Agriculture and Interior, challenging them to jointly commit to a demonstration project in Nevada with the focus on targeted removal of pinyon and juniper in areas of highest need.

“There is a lot at stake here in terms of enhancing the overall productivity of the land, with benefits for wildlife, rural people and enhanced forest health, Adler said.

“More than 50 percent of this county is in Phase III (highest density) pinyon and juniper,” Whitten said. “With 70 percent of the homes located there we face a huge risk. A fire would wipe out homeowners and our county’s property tax base. We need some help here to deal with this problem.”

Undersecretary Sherman applauded the partnership and its efforts, noting that forest health is a critically important issue across the west. “Instead of random acts of conservation, we must think about landscape- scale conservation,” Harris said. “Priorities need to be set locally and collectively, using a regional partnership approach.”