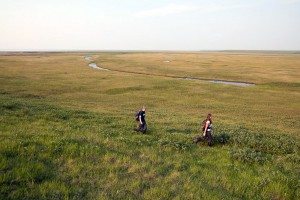 Emily Ulrich and Melissa Robbins, University of Nevada, Reno undergraduate students, walk across the Arctic Tundra in search of river and lake water to sample for invertebrates and water quality as part of the Polaris Project, an international effort to study impacts of and potential affects of climate change in the Siberian Arctic. Photo by Max Wilbert

Attacked by hungry mosquitoes the size of small birds, stranded in reindeer hunters shacks, and slogging around boot-swallowing muddy bogs of the Siberian arctic – it was all in a day’s work for University of Nevada, Reno researchers and students in the Polaris Project, an international team of scientists and students studying climate change where, after 10,000 years, permafrost is thawing at an alarming rate.

“We see the permafrost receding hundreds of yards each year, and the ancient carbon from Pleistocene era plants and animals being unleashed into the air, soil and water,” said Sudeep Chandra, University of Nevada faculty member and researcher. He has been on the team of principal investigators since the project began three years ago. “Where the carbon goes and how it will affect climate are part of what the team is investigating.”

Chandra and three of his students recently returned from a one-month expedition near Cherskiy, at the Northeast Science Station located approximately 80 kilometers south of the Arctic Ocean in northeastern Russia on the Kolyma River. It’s a beautiful and desolate region of the world where the 35 participants lived on an old 90-foot barge that serves as a mobile base for field trips up and down the river. They spent their days collecting scientific samples, bug bites and sunburns in the sometime and uncharacteristic 90-degree heat.

During the Polaris Project field course, students and faculty work together to study the Arctic as a complete system.

“The central theme of the project is to understand the transformation of carbon across an area in the Arctic that has more carbon stored underneath it than the whole Amazon basin’s above-ground vegetation,” Chandra said. “Thus, all of the projects explore the transformation of this carbon along different paths, for example, soils to water, particulate to bug, or dissolved state via microbe communities.”

Instead of focusing on a single question in a single ecosystem type, the project participants consider a range of questions across multiple components of the Arctic System including forests, tundra, lakes, rivers, estuaries and the coastal Arctic Ocean. The unifying scientific theme is the transport and transformations of carbon and nutrients as they move with water from terrestrial uplands to the Arctic Ocean, which may be causing further global warming.

Returning University of Nevada, Reno student Joanne Heslop, from Incline Village at Lake Tahoe, worked on a project exploring links of the terrestrial environment to the aquatic environment with Chandra and Russian permafrost scientists. She focused on soluble nutrient leaching potentials in permafrost from many locations and depths, and thus ages from 10,000 years ago, to determine the qualities of the carbon that entered the river.

Another University student, Emily Ulrich, from Dayton, Nev., investigated the biodiversity of bottom dwelling invertebrates and the role they play in transforming particulate carbon in the watershed, and whether they may or may not be changing this carbon to a greenhouse form.

Sophomore Melissa Robbins, on her first trip to the arctic, based her field research on findings from last year’s project, focusing on seasonal transformation of carbon to a dissolved state.

Chandra, an assistant professor in the University’s Department of Natural Resources and Environmental Science, is a limnologist whose work includes studying invasive species, water quality and aquatic ecosystem management issues at Lake Tahoe, Lake Atitlan in Guatemala, Lake Mead in Nevada and Castle Lake in California. He received the Award of Excellence this year from the American Fisheries Society California-Nevada Chapter.

The Polaris Project is a collaborative effort by the Woods Hole Research Center, seven universities and colleges, and the Northeast Science Station in Cherskiy, Russia. The project is generously supported by the National Science Foundation’s International Polar Year Program.

Knowing how heat and humidity affect your body can help...