by Sean Whaley, Nevada News Bureau: Several Nevada business leaders took the opportunity of the upcoming Labor Day holiday to speak out today against federal legislation they say will kill jobs in Nevada at a time when the unemployed total more than 20 percent.

The Alliance to Protect Nevada Jobs held a “reverse” job fair to convey concerns that if Congress passes the Employee Free Choice Act now pending in the Senate, the country could lose 600,000 jobs within a year of its passage.

Opponents of the measure, which has passed the House of Representatives, say it would eliminate an existing federal requirement that workers be allowed to vote in secret on any unionization proposal. It would also require disputes between unions and employers to be subjected to binding arbitration.

“With 200,000 people looking for work here in Nevada today, the notion of this legislation even being considered is just ridiculous,” said McKay Daniels, speaking on behalf of the alliance.

He said the measure should be called the Employee “Forced Choice” Act and will result in forced unionization of workers in Nevada and across the country.

A Nevada labor leader said in response that the legislation will not eliminate jobs, but would give workers the right to decide how to form a union.

Daniels was joined by Clara Andriola, president of the Nevada Chapter of the Associated Builders and Contractors, Ray Bacon, executive director of the Nevada Manufacturers Association, Randi Thompson, state director of the National Federation of Independent Business (NFIB) and Tray Abney, director of government relations with the Reno-Sparks Chamber of Commerce, in speaking out against the legislation and other potentially job-killing proposals now being considered in Washington and in Nevada.

Andriola said: “Forced unionization isn’t going to help turn our economy around. Adding burdens, expenses and red tape onto Nevada’s job producers is the fastest way to destroy jobs, not create them.” 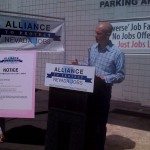 McKay Daniels speaks for the Alliance to Protect Nevada Jobs with a giant “pink slip”.

Abney said the reason employers are not investing in jobs in Nevada is because of the high level of uncertainty about the potential for new taxes.

“There is a reason people aren’t investing in Nevada and that’s because of the words of our elected officials, both in Washington and in Carson City,” he said.

“These increased costs by themselves could force many companies out of business or overseas,” he said. “To even talk about adding additional expenses or regulations onto struggling businesses during a time like this is just insanity.”

But Danny Thompson, executive secretary-treasurer of the Nevada State AFL-CIO, said the act will not eliminate jobs. It would give workers some rights, he said.

“All it does is give the employees the right to chose how they want to form a union,” Thompson said. “The system right now that we have in place with the National Labor Relations Act does not work. It is fraught with delay.”

The act does not eliminate the secret ballot, but would allow employees to use alternatives such as sign-up cards if that is their preference, he said.

In a statement Ensign said: “The right for workers to vote by secret ballot in union elections is a fundamental part of our democratic tradition. The big union push for card check not only leaves employees open to union intimidation but also harms the ability of American businesses to create jobs. The unfortunate reality behind card check is that it actually has little to do with protecting workers. Instead, this disastrous policy would only lead to more job losses and greater burdens on small businesses and would do little to help jump start Nevada’s struggling economy.”